C. Kalizyk and J. Urban proposed a supervised learning based ATP, FEMaLeCoP, whose underlying proof calculi is the same as this paper in 2015 [3]. Their algorithm learns from existing proofs to choose the next tableau extension step. Since the MaLARea [8] system, number of iterations of a feedback loop between proving and learning have been explored, remarkably improving over human-designed heuristics when reasoning in large theories. However, such systems are known to only learn a high-level selection of relevant facts from a large knowledge base and delegate the internal proof search to standard ATP systems. S. Loos, et al. developed an supervised learning ATP system in 2017 [4], with superposition as their proof calculi. However, they chose deep neural network (CNNs and RNNs) as feature extractor. These systems are treated as black boxes in literature with not much understanding of their performances possible.

In leanCoP [9], one of the simpler connection tableau systems, the next tableau extension step could be selected using supervised learning. In addition, the first experiments with Monte-Carlo guided proof search [5] have been done for connection tableau systems. The improvement over the baseline measured in that work is much less significant than here. This is closest to the authors' approach but the performance is poorer than this paper.

The original first-order sentence is valid if and only if the Skolemized DNF formula is a tautology. The connection calculi attempt to show that the Skolemized DNF formula is a tautology by constructing a tableau. We will start at the special node, root, which is an open leaf. At each step, we select a clause (for example, clause [math]P \wedge R[/math] is selected in the first step), and add the literals as children for an existing open leaf. For every open leaf, examine the path from the root to this leaf. If two literals on this path are unifiable (for example, [math]Qx'[/math] is unifiable with [math]\neg Qc[/math]), this leaf is then closed. An example of a closed tableaux is shown in Figure 1. In standard terminology, it states that a connection is found on this branch. 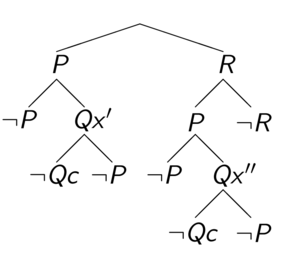 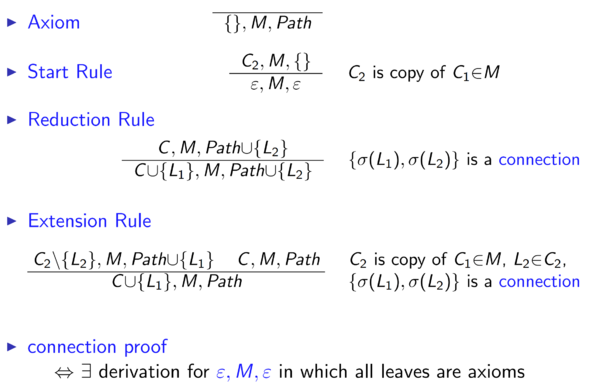 Mizar Math Library (MML) [7, 10] is a library of mathematical theories. The axioms behind the library is the Tarski-Grothendieck set theory, written in first-order logic. The library contains 57,000+ theorems and their proofs, along with many other lemmas, as well as unproven conjectures. Figure 4 shows a Mizar article of the theorem "If [math] p [/math] is prime, then [math] \sqrt p [/math] is irrational." 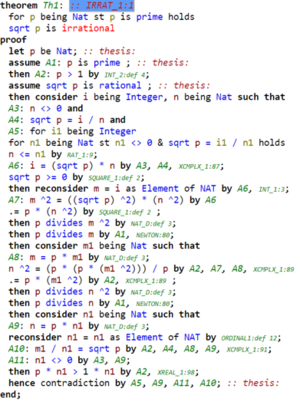 From many runs of MCT, we will know the optimal prior probability of actions (inferences) in particular proof states, we can extract the frequency of each action [math] a [/math], and normalize it by dividing with the average action frequency at that state, resulting in a relative proportion [math] r_a \in (0, \infty) [/math]. We characterize the proof states for policy learning by extracting human-engineered features. Also, we characterize actions by extracting features from the clause chosen and literal chosen as well. Thus we will have a feature vector [math] (f_s, f_a) [/math].

Besides these results, there were also found that some test problems could be solved with rlCoP easily but mlCoP could not.