Certain characteristics desired of the retriever are high recall since the reader will only be applied to a subset meaning there is an an opportunity to identify false positive but not false negatives. The other characteristic desired of a retriever is low latency. The popular approach to meet these heuristics has been the BM-25 [2] which is relies on token-based matching between two high-dimensional and sparse vectors representing [math]q[/math] and [math]d[/math] this approach performances well and retrieval can be performed in time sublinear to the number of passages with inverter indexing. The downfall of this type of algorithm is its inability to be optimized for a specific task. An alternate option is BERT or transformer based models with cross attention between query and passage pairs these can be optimized for a specific task. However, these models suffer from latency as the retriever needs to process all the pairwise combinations of a query with all passages. The next type of algorithm is an embedding-based model that jointly embeds the query and passage in the same embedding space and then uses measures such as cosine distance, inner product, or even the Euclidean distance in this space to get a score. The authors suggest the two-tower models can capture deeper semantic relationships in addition to being able to be optimized for specific tasks. This model is referred to as the "two-tower retrieval model", since it has two transformer based models where one embeds the query [math]\phi{(\cdot)}[/math] and the other the passage [math]\psi{(\cdot)}[/math], then the embeddings can be scored by [math]f(q,d) = \langle \phi{(q)},\psi{(d)} \rangle \in \mathbb{R} [/math]. This model can avoid the latency problems of a cross-layer model by pre-computing [math]\psi{(d)}[/math] before hand and then by utilizing efficient approximate nearest neighbor search algorithms in the embedding space to find the nearest documents. 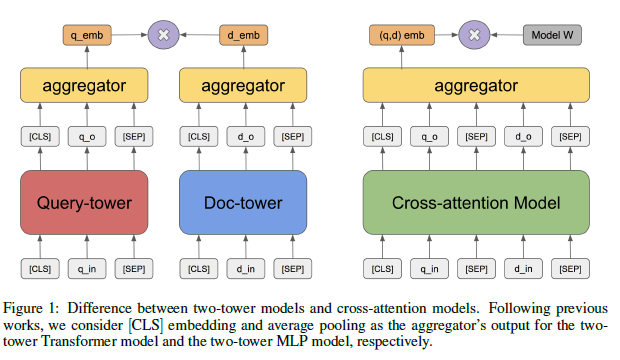 In terms of inference the two-tower architecture has a distinct advantage as be easily seen from the architecture, since the query and document are embedded independently, [math] \psi{(d)}[/math] can be pre computed. This is an important advantage as it makes the two-tower method feasible as an example the authors state the inner product between 100 query embeddings ad 1 million document embeddings only takes hundreds of milliseconds on CPUs, however, for the equivalent calculation for a cross-attention-model it takes hours on GPUs. In addition they remark the retrieval of the relevant documents can be done in sublinear time with respect [math] |\mathcal{Y}| [/math] using a maximum inner product (MIPS) algorithm with little loss in recall.

In terms of learning the two-tower model compared to BM-25 has a unique advantage of being possible to fine tuned for downstream tasks. This problem is within the paradigm of metric learning as the scoring function can be passed used as input to a objective function of the log likelihood [math] max_{\theta} \space log(p_{\theta}(d|q)) [/math]. The conditional probability is represented by a SoftMax and then can be rewritten as:

Here [math] \mathcal{D} [/math] is the set of all possible document, the denominator is a summation over [math]\mathcal{D} [/math]. As is customary they utilized a sampled SoftMax technique to approximate the full-SoftMax. The technique they have employed is by using a small subset of documents in the current training batch, while also using a proper correcting term ensure the unbiasedness of the partition function. 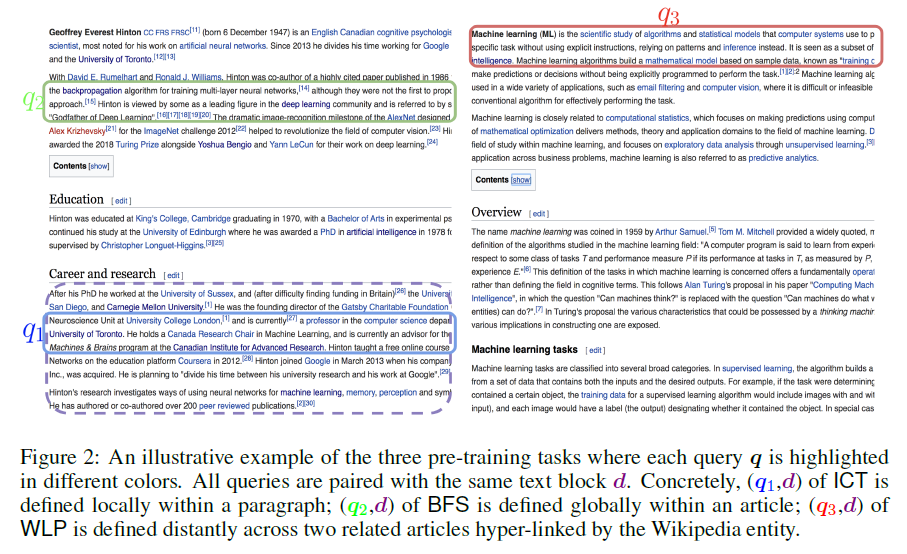 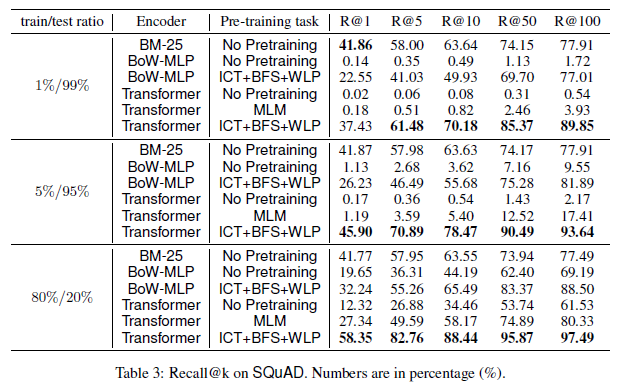 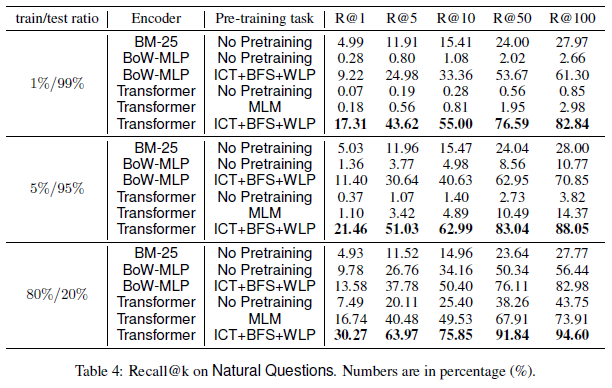 The authors of this paper suggest from their experiments that the combination of the 3 pretraining tasks ICT, BFS, and WLP yields the best results in general. However, they do acknowledge why two of the three pre-training tasks may not produce equally significant results as the three. From the ablation study and the small margin (1.5%) in which the three tasks achieved outperformed only using ICT in combination with observing ICT outperforming the three as seen in table 6 in certain scenarios. It seems plausible that a subset of two tasks could also potentially outperform the three or reach a similar performance. I believe this should be addressed in order to conclude three pre-training tasks are needed over two, though they never address this comparison I think it would make the paper more complete.