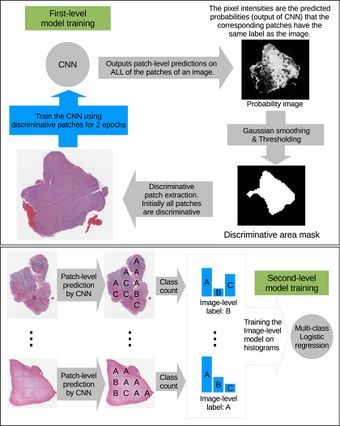 For training CNN, $1000$ valid patches per image and per scale is extracted from WSIs which are non-overlapping given the WSI resolution. Each patch has the size of $500*500$ and for capturing the structures at different scales, patches are extracted from 20X (0.5 microns per pixel) and 5X (2.0 microns per pixel) objective magnifications. For avoiding overfitting, three kinds of data augmentation are employed in every iteration on a random $400×400$ sub-patch from each $500×500$ patch as: 1. Rotating randomly, 2. Mirroring the sub-patch and 3. Adjusting the amount of Hematoxylin and eosin stained on the tissue randomly. For doing the third one the RGB color of the tissue is decomposed into the H&E color space. Then, the magnitude of $H$ and $E$ of every pixel is multiplied by two i.i.d. Gaussian random variables with expectations equal to one.