Robotic systems can be used for many applications, but to truly be useful for complex applications, they need to overcome 2 challenges: having the intent of the task at hand communicated to them, and being able to perform the manipulations necessary to complete this task. It is preferable to use demonstration to teach the robotic systems rather than natural language, as natural language may often fail to convey the details and intricacies required for the task. However, current work on learning from demonstrations is only successful with large amounts of feature engineering or a large number of demonstrations. The proposed model aims to achieve 'one-shot' imitation learning, ie. learning to complete a new task from just a single demonstration of it without any other supervision. As input, the proposed model takes the observation of the current instance a task, and a demonstration of successfully solving a different instance of the same task. Strong generalization was achieved by using a soft attention mechanism on both the sequence of actions and states that the demonstration consists of, as well as on the vector of element locations within the environment. The success of this proposed model at completing a series of block stacking tasks can be viewed at http://bit.ly/nips2017-oneshot.

While one-shot imitation learning is a novel combination of ideas, each of the components has previously been studied.

The problem is briefly formalized with the authors describing a distribution of tasks, an individual task, a distribution of demonstrations for this task, and a single demonstration respecitvely as \[T, t\sim T, D(t), d\sim D(t)\] In addition, an action, an observation, parameters, and a policy are respectively defined as \[a, o, \theta, \pi_\theta(a|o,d)\] In particular, a demonstration is a sequence of observation and action pairs \[d = [(o_1, a_1),(o_2, a_2), . . . ,(o_T , a_T )]\] Assuming that $$T$$ and some evaluation function $$R_t(d): R^T \rightarrow R$$ are given, and that succesful demonstrations are available for each task, then the objective is to maximize expectation of the policy performance over \[t\sim T, d\sim D(t)\].

The tasks that the authors focus on is block stacking. A user specifies in what final configuration cubic blocks should be stacked, and the goal is to use a 7-DOF Fetch robotic arm to arrange the blocks in this configuration. The number of blocks, and their desired configuration (ie. number of towers, the height of each tower, and order of blocks within each tower) can be varied and encoded as a string. For example, 'abc def' would signify 2 towers of height 3, with block A on block B on block C in one tower, and block D on block E on block F in a second tower. To add complexity, the initial configuration of the blocks can vary and is encoded as a set of 3-dimensional vectors describing the position of each block relative to the robotic arm.

To avoid needing to specify a reward function, the authors use behavioral cloning and DAGGER, 2 imitation learning methods that require only demonstrations, for training. In each training step, a list of tasks is sampled, and for each, a demonstration with injected noise along with some observation-action pairs are sampled. Given the current observation and demonstration as input, the policy is trained against the sampled actions by minimizing L2 norm for continuous actions, and cross-entropy for discrete ones. Adamax is used as the optimizer with a learning rate of 0.001.

The authors propose a novel architecture for imitation learning, consisting of 3 networks.

This network takes a demonstration as input and produces an embedding with size linearly proportional to the number of blocks and the size of the demonstration.

Since a demonstration for block stacking can be very long, the authors randomly discard 95% of the time steps, a process they call 'temporal dropout'. The reduced size of the demonstrations allows multiple trajectories to be explored during testing to calculate an ensemble estimate. Dilated temporal convolutions and neighborhood attention are then repeatedly applied to the downsampled demonstrations.

Since demonstration sizes can vary, a mechanism is needed that is not restricted to fixed-length inputs. While soft attention is one such mechanism, the problem with it is that there may be increasingly large amounts of information lost if soft attention is used to map longer demonstrations to the same fixed length as shorter demonstrations. As a solution, the authors propose having the same number of outputs as inputs, but with attention performed on other inputs relative to the current input.

A query, a list of context vectors, and a list of memory vectors are given as input to soft attention. Each attention weight is given by the product of a learned weight vector and a nonlinearity applied to the sum of the query and corresponding context vector. Softmaxed weights applied to the corresponding memory vector form the output of the soft attention.

A list of same-length embeddings, coming from a previous neighbourhood attention layer or a projection from the list of block coordinates, is given as input to neighborhood attention. For each block, two separate linear layers produce a query vector and a context vector, while a memory vector is a list of tuples that describe the position of each block joined with the input embedding for that block. Soft attention is then performed on this query, context vector, and memory vector. The authors claim that the intuition behind this process is to allow each block to provide information about itself relative to the other blocks in the environment. Finally, for each block, a linear transformation is performed on the vector composed by concatenating the input embedding, the result of the soft attention for that block, and the robot's state.

This network takes the current state and the embedding produced by the demonstration network as inputs and outputs a fixed-length "context embedding" which captures only the information relevant for the manipulation network at this particular step.

The current state is used to compute a query vector which is then used for attending over all the steps of the embedding. Since at each time step there are multiple blocks, the weights for each are summed together to produce a scalar for each time step. Neighbourhood attention is then applied several times, using an LSTM with untied weights, since the information at each time steps needs to be propagated to each block's embedding.

Performing attention over the demonstration yields a vector whose size is independent of the demonstration size; however, it is still dependent on the number of blocks in the environment, so it is natural to now attend over the state in order to get a fixed-length vector.

The authors propose that in general, within each subtask, only a limited number of blocks are relevant for performing the subtask. If the subtask is to stack A on B, then intuitively, one would suppose that only block A and B are relevant, and perhaps any blocks that may be blocking access to either A or B. This is not enforced during training, but once soft attention is applied to the current state to produce a fixed-length context embedding, the authors believe that the model does indeed learn in this way.

Given the context embedding as input, this simple feedforward network decides on the particular action needed, to complete the subtask of stacking one particular 'source' block on top of another 'target' block.

The proposed model was tested on the block stacking tasks. 140 training tasks and 43 testing tasks were collected, each with between 2 to 10 blocks and a different, desired final layout. Over 1000 demonstrations for each task were collected using a hard-coded policy rather than a human user. The authors compare 4 different architectures in these experiments:

The most confident action at each timestep is chosen in 100 different task configurations, and results are averaged over tasks that had the same number of blocks. The results suggest that the performance of each of the architectures is comparable to that of the hard-coded policy which they aim to imitate. Performance degrades similarly across all architectures and the hard-coded policy as the number of blocks increases. On the harder tasks, conditioning on the entire demonstration led to better performance than conditioning on snapshots or on the final state. The authors believe that this may be due to the lack of information when conditioning only on the final state as well as due to regularization caused by temporal dropout which leads to data augmentation when conditioning on the full demonstration but is omitted when conditioning only on the snapshots or final state. Both DAGGER and behavioral cloning performed comparably well. As mentioned above, noise injection was used in training to improve performance; in practice, additional noise can still be injected but some may already come from other sources.

The proposed model successfully learns to complete new instances of a new task from just a single demonstration. The model was demonstrated to work on a series of block stacking tasks. The authors propose several extensions including enabling few-shot learning when one demonstration is insufficient, using image data as the demonstrations, and attempting many other tasks aside from block stacking.

While the paper shows an incredibly impressive result: the ability to learn a new task from just a single demonstration, there are a few points that need clearing up. Firstly, the authors use a hard-coded policy in their experiments rather than a human. It is clear that the performance of this policy begins to degrade quickly as the complexity of the task increases. It would be useful to know what this hard-coded policy actually was, and if the proposed model could still have comparable performance if a more successful demonstration, perhaps one by a human user, were performed. Give the current popularity of adversarial examples, it would also be interesting to see the performance when conditioned on an "adversarial" demonstration, that achieves the correct final state, but intentionally performs complex or obfuscated steps to get there. Second, it would be useful to see the model's performance on a more complex family of tasks than block stacking, since although each block stacking task is slightly different, the differences may turn out be insignificant compared to other tasks that this model should work on if it is to be a general imitation learning architecture. Regardless, this work is a big step forward for imitation learning, permitting a wider range of tasks for which there is little training data and no reward function available, to still be successfully solved. 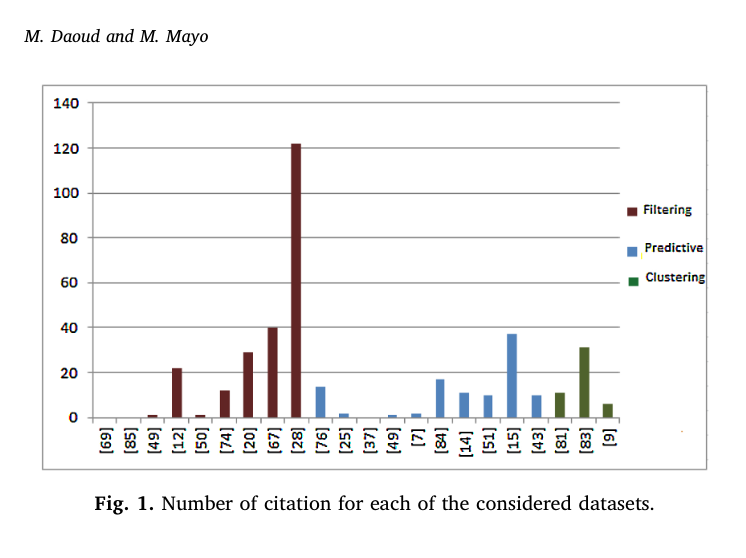 Another simple yet insightful example of the One-Shot Imitation Learning is the particle reaching problem which provides a relatively simple suite of tasks from which the network needs to solve an arbitrary one. The problem is formulated such that for each task: there is an agent which can move based on a 2D force vector, and n landmarks at varying 2D locations (n varies from task to task) with the goal of moving the agent to the specific landmark reached in the demonstration. This is illustrated in Figure 1. 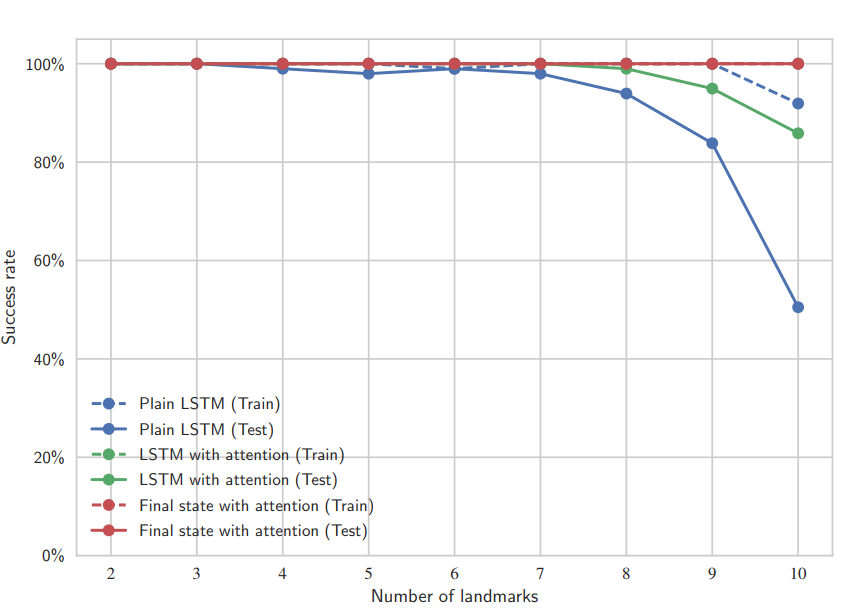