In the defenses proposed in ICLR 2018, there are three ways of obfuscating gradients were found:

The authors propose a number of tests that might help detect when a defence relies on obfuscated gradients.

Iterative attacks should work better than single-step attacks, since iterative attacks are strictly stronger than single-step attacks. White-box attacks should perform better than black-box attacks, since the black-box threat model is a strict subset of the white-box threat model. Attacks with an unbounded distortion metric (e.g. L_2 norm) should find adversarial examples with 100% success. Optimization-based attacks should perform better than brute-force sampling of nearby inputs (sampling within an ϵ-ball). These tests may not cover all cases of obfuscated gradients, but they indicate when intuitive properties start to break down. All defences with obfuscated gradients discussed by the authors fail at least one test. 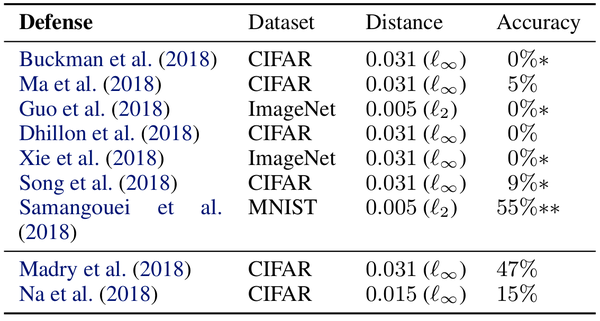 The last column shows the accuracies each defence method achieved over the adversarial test set. Except for [Madry, 2018], all defence methods could only achieve an accuracy of <10%. Furthermore, the accuracy of most methods was 0%. The results of [Samangoui,2018] (double asterisk), show that their approach was not as successful. The authors claim that is is a result of implementation imperfections but theoretically, the defense can be circumvented using their proposed method.

Training proceeds in the following way. For each clean input image, a distorted version of the image is found by maximizing the inner maximization problem for a fixed number of iterations. Gradient steps are constrained to fall within the allowed range (projected gradient descent). Next, the classification problem is solved by minimizing the outer minimization problem. This approach was shown to provide resilience to all types of adversarial attacks.

For future defence proposals, it is recommended to avoid using masked gradients. To assist with this, the authors propose a set of conditions that can help identify if a defence is relying on masked gradients:

Defence:[Gou, 2018] investigated the effect of including different input transformation on the robustness to adversarial images. As a baseline, the authors evaluate image cropping and rescaling, bit-depth reduction, and JPEG compression. In particular, they found two techniques provided the greatest resistance: total variance minimization and image quilting. Total variance minimization is a technique that removes high-frequency noise while preserving legitimate edges (good high-frequency components). In image quilting, a large database of image patches from clean images is collected. At test time, input patches, that contain a lot of noise, are replaced with similar but clean patches from the database. The authors explore different combinations of input transformations along with different underlying ImageNet classifiers, including adversarially trained models. They find that input transformations provide protection even with a vanilla classifier.

Defence: [Dhillon, 2018] use test time randomness in their model to guard against adversarial attacks. Because adversarial perturbations are like noises, randomly dropping activation can decrease their collective impact on the classifier. Within a layer, the activities of component nodes are randomly dropped with a probability proportional to its absolute value. The rest of the activation are scaled up to preserve accuracies. This is akin to test time drop-out. This technique was found to drop accuracy slightly on clean images, but improved performance on adversarial images.

Defence: [Xie, 2018] Add a randomization layer to their model to help defend against adversarial attacks. For an input image of size [299,299], first the image is randomly re-scaled to [math]r \in [299,331][/math]. Next, the image is zero-padded to fix the dimension of the modified input. This modified input is then fed into a regular classifier. The authors claim that is strategy can provide an accuracy of 32.8% against ensemble attack patterns (fixed distortions, but many of them which are picked randomly). Because of the introduced randomness, the authors claim the model builds some robustness to other types of attacks as well.

Defence: [Song, 2018] argues that adversarial images lie in low probability regions of the data manifold. Therefore, one way to handle adversarial attacks is to project them back into the high probability regions before feeding them into a classifier. They chose to do this by using a generative model (pixelCNN) in a denoising capacity. A PixelCNN model directly estimates the conditional probability of generating an image pixel by pixel [Van den Oord, 2016],

Before classifying the samples, Defence-GAN projects them onto the data manifold utilizing GAN. The intuition behind this approach is almost similar to that of PixelDefend. It uses GAN instead of pixel CNN.

In this paper, it was found that gradient masking is a common flaw in many defences claiming robustness against white box adversarial attacks. This leads to a perceived robustness against adversarial attacks when in reality it results in weaker adversarial image construction. The authors develop three attacks that can overcome gradient masking. With their attacks, they found that actual robustness of 7 out of the 9 defences proposed in ICLR-2018, is significantly lower. In fact, many defences were found to be completely ineffective.