The authors of this paper have pointed out that the method in which most notes are created are hand-designed instruments modifying pitch, velocity and filter parameters to produce the required tone, timbre and dynamics of a sound. The authors suggest that this may be a problem and thus suggest a data-driven approach to audio synthesis. They demonstrate how to generate new types of expressive and realistic instrument sounds using a neural network model instead of using specific arrangements of oscillators or algorithms for sample playback. The model is capable of learning semantically meaningful hidden representations which can be used as control signals for manipulating tone, timbre, and dynamics during playback. To train such a data expensive model the authors highlight the need for a large dataset much like imagenet for music. The motivation for this work stems from recent advances in autoregressive models like WaveNet [5] and SampleRNN [6]. These models are effective at modeling short and medium scale (~500ms) signals, but rely on external conditioning for large-term dependencies; the proposed model removes the need for external conditioning.

The authors attempted to train the baseline on multiple input: raw waveforms, FFT, and log magnitude of spectrum finding the latter to be best correlated with perceptual distortion. The authors also explored several representations of phase, finding that estimating magnitude and using established iterative techniques to reconstruct phase to be most effective. (The technique to reconstruct the phase from the magnitude comes from (Griffin and Lim 1984). It can be summarized as follows. In each iteration, generate a Fourier signal z by taking the Short Time Fourier transform of the current estimate of the complete time-domain signal, and replacing its magnitude component with the known true magnitude. Then find the time-domain signal whose Short Time Fourier transform is closest to z in the least-squares sense. This is the estimate of the complete signal for the next iteration. ) A final heuristic that was used by the authors to increase the accuracy of the baseline was weighting the mean square error (MSE) loss starting at 10 for 0 HZ and decreasing linearly to 1 at 4000 Hz and above. This is valid as the fundamental frequency of most instrument are found at lower frequencies. 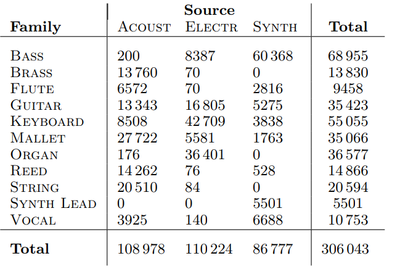 Sound is historically very difficult to quantify from a picture representation as it requires training and expertise to analyze. Even with expertise it can be difficult to complete a full analyses as two very different sound can look quite similar in the respective pictorial representation. This is why the authors recommend all readers to listen to the created notes which can be sound here: https://magenta.tensorflow.org/nsynth.

One significant area which the authors claim great improvement is needed is the large memory constraints required by there algorithm. Due to the large memory requirement the current WaveNet must rely on down sampling thus being unable to fully capture the global context. They claim that research using different input representations (instead of mu-law) to minimize distortion is ongoing.

- Authors have never conducted a human study determining sound similarity between the original, baseline, and WaveNet. - Architecture is not very novel