Solution: MSDNets use dense connectivity to avoid this issue. DenseNet suffers much less from this effect. Dense connectivity connects each layer with all subsequent layers and allows later layers to bypass features optimized for the short-term, to maintain the high accuracy of the final classifier. By concatenating all prior layers to learn future layers, the gradient propagation is spread throughout the available features. This allows later layers to not be reliant on any single prior, providing opportunities to learn new features that priors have ignored. Which means If an earlier layer collapses information to generate short-term features, the lost information can be recovered through the direct connection to its preceding layer. The final classifier’s performance becomes (more or less) independent of the location of the intermediate classifier. 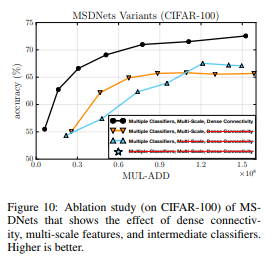 We presented the MSDNet, a novel convolutional network architecture, optimized to incorporate CPU budgets at test-time. Our design is based on two high-level design principles, to generate and maintain coarse level features throughout the network and to inter-connect the layers with dense connectivity. The former allows us to introduce intermediate classifiers even at early layers and the latter ensures that these classifiers do not interfere with each other. The final design is a two dimensional array of horizontal and vertical layers, which decouples depth and feature coarseness. Whereas in traditional convolutional networks features only become coarser with increasing depth, the MSDNet generates features of all resolutions from the first layer on and maintains them throughout. The result is an architecture with an unprecedented range of efficiency. A single network can outperform all competitive baselines on an impressive range of budgets ranging from highly limited CPU constraints to almost unconstrained settings. As future work we plan to investigate the use of cost-aware deep architectures beyond object classification, e.g. image segmentation (Long et al., 2015). Further, we intend to explore approaches that combine MSDNets with model compression (Chen et al., 2015; Han et al., 2015), spatially adaptive computation (Figurnov et al., 2016) and more efficient convolution operations (Chollet, 2016; Howard et al., 2017) to further improve computational efficiency.