Difference between revisions of "Model Agnostic Learning of Semantic Features"

Transfer learning is a line of research which focuses on storing knowledge from one domain (source domain) to solve a similar problem in another domain (target domain). In addition to regular transfer learning, one can use "transfer metric learning" by which similarity relationship between samples [1], [2] are used to learn a metric space in which robust and discriminative data representation are formed. However, both of these kinds of techniques work insofar as the domain shift between source and target domains is negligible. Domain shift is defined as the deviation in the distribution of the source domain and the target domain and it would cause the deep neural network (DNN) model to completely fail. Multi-domain learning (MDL) is the solution when the assumption of "source domain and target domain come from an almost identical distribution" may not hold. There are two variants of MDL in the literature that can be confused, i.e. domain generalization, and domain adaptation; however in domain adaptation, we have access to the target domain data somehow, while that is not the case in domain generalization. This paper introduces a technique for domain generalization based on two complementary losses that regularize the semantic structure of the feature space through an episodic training scheme originally inspired by the model-agnostic meta-learning.

Originated from model-agnostic meta-learning (MAML), episodic training has been widely leveraged for addressing domain generalization [3, 4, 5, 7, 8, 6, 9, 10, 11]. Meta-Learning for domain generalization (MLDG) [4] closely follows MAML in terms of back-propagating the gradients from an ordinary task loss on meta-test data, but it has its own limitation as the use of the task objective might be sub-optimal since it only uses class probabilities. Most of the works [3,7] in the literature lack notable guidance from the semantics of feature space, which contains crucial domain-independent ‘general knowledge’ that can be useful for domain generalization. The authors claim that their method is orthogonal to previous works.

Also known as "learning to learn", Model-agnostic meta-learning is a learning paradigm in which optimal initial weights are found incrementally (episodic training) by minimizing a loss function over some similar tasks (meta-train, meta-test sets). Imagine a 4-shot 2-class image classification task as below:

Although the task loss is a decent predictor, nothing prevents the model from overfitting to the source domains and suffering from degradation on unseen test domains. This issue is considered in other loss terms. 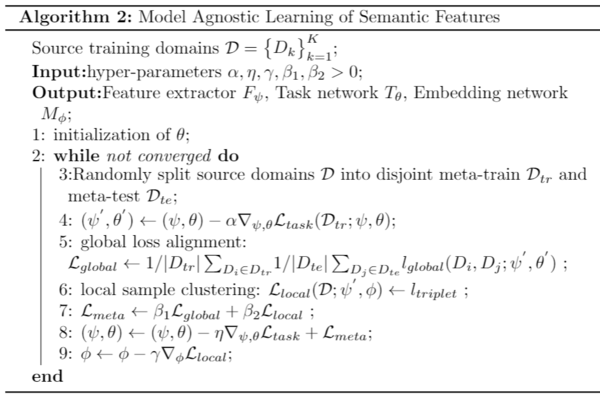 The work proposes a new domain generalization technique by taking the advantage of global and local constraints for learning semantic feature spaces, which outperforms the state-of-the-art. The power and effectiveness of this method has been demonstrated using two domain generalization benchmarks and a real clinical dataset (MRI image segmentation). The code is publicly available at [19]. As future work, it would be interesting to integrate the proposed loss functions with other methods as they are orthogonal to each other and evaluate the benefit of doing so. Also, investigating the usage of the current learning procedure in the context of generative models would be an interesting research direction.