During the testing phase, the model will temporarily adapt the weights of the output network [math]g_{\theta}[/math] based on the input [math]x[/math] and the contents of the memory, [math]M[/math], according to

First, [math]x[/math] is inputted into the embedding network, [math]q = f_{\gamma}(x)[/math]. Based on query [math]q[/math], a K-nearest neighbours search is conducted. The contextual, $C$, is the result of this search.

Each of the neighbours has a weighting [math]w_k^{(x)}[/math] attached to it, based on how close it is to query [math]q[/math]. This calculation is based on the kernel function,

The temporary updates during adaptation are based on maximizing the weighted average of the log likelihood over the neighbours in C, also known as the maximum a posteriori over the contextual, [math]C[/math],

Note that the first term here acts as regularization that prevents over-fitting. Unfortunately, equation 1 does not have a closed form solution. However, it can be maximized using gradient descent in a fixed number of steps. Each of these steps is calculated via [math]\Delta M[/math],

where [math]\beta[/math] is a hyper-parameter of gradient descent. After a series of gradient descent steps, the weights of the final output network [math]g_{\theta}[/math] are temporarily adapted and a prediction is made, [math]\hat y[/math]. 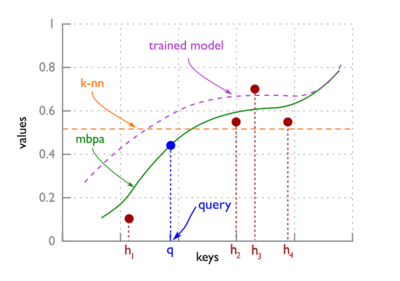 Local fitting on a regression task given a query (blue) and the context from memory (red).[1].

As can be seen in figure 2, the final prediction [math]\hat y[/math] is similar to a weighted average of the values of the K-nearest neighbours. 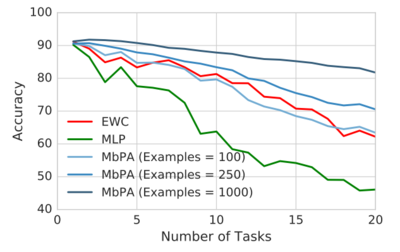 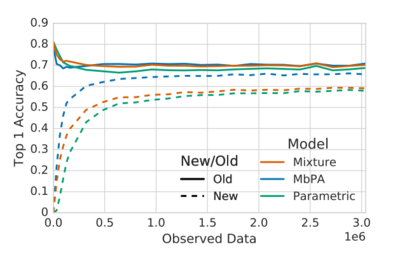