The model was trained on 10 000 examples per task, using a 2 layer multi-layer perceptron (MLP) with an ADAM optimizer. The elastic weight consolidation (EWC) method and regular gradient descent were used to estimate the parameters. A grid search was used to determine the EWC penalty cost and the local MbPA learning rate was set as <\math>\beta\in(0.0,0.1)<\sup> and number of steps (n) was <\math>n\in[1,20]<\math>. 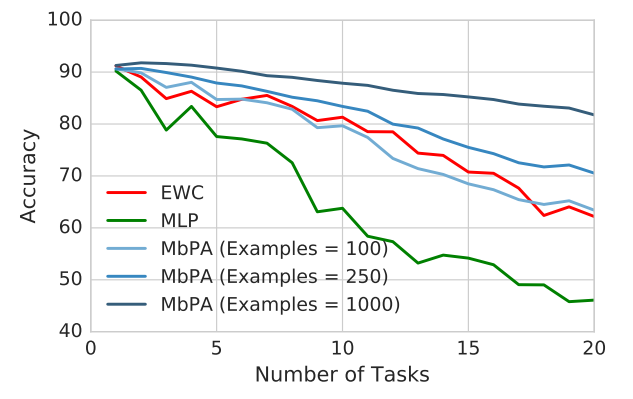 The authors used the pixels as the embedding, i.e. <\math>f_{\gamma}<\math> is the identity function, and looked at regions where episodic memory was small. The authors found that through MbPA only a few gradient steps on carefully selected data from memory is enough to recover performance. They found that MbPA outperformed MLP and worked better than EWC in most cases and found that the performance of MbPA grew with the number of examples stored. They note that the memory requirements were lower than EWC. The lower memory requirements are attributed to the fact that EWC stores all task identifiers, whereas MbPA only stores a few examples. The figure above also shows the results of MbPA combined with other methods. It is noted that MbPA combined with EWC gives the best results.

The MbPA model can successfully overcome several shortcomings associated with neural networks through its non-parametric, episodic memory. In fact, many other works in the context of classification and language modelling among others have successfully used variants of this architecture, where traditional neural network systems are augmented with memories. Likewise, the experiments in incremental and continual learning presented in this paper use a memory architecture similar to the Differential Neural Dictionary (DND) used in Neural Episodic Control (NEC) found in [6], though the gradients from the memory in the MbPA model are not used during training. In conclusion, MbPA presents a natural way to improve the performance of standard deep networks.