Difference between revisions of "Mask RCNN"

Mask RCNN [1] is a deep neural network architecture that aims to solve instance segmentation problems in computer vision which is important when attempting to identify different objects within the same image. RCNN base architectures first extract a regional proposal (a region of the image where the object of interest is proposed to lie) and then attempts to classify the object within it. Mask R-CNN extends Faster R-CNN [2] by adding a branch for predicting an object mask in parallel with the existing branch for bounding box recognition. This is done by using a Fully Convolutional Network as each mask branch in a pixel-by-pixel way. Mask R-CNN is simple to train and adds only a small overhead to Faster R-CNN, running at 5 fps. Moreover, Mask R-CNN is easy to generalize to other tasks, e.g., allowing us to estimate human poses in the same framework. Mask R-CNN achieved top results in all three tracks of the COCO suite of challenges [3], including instance segmentation, bounding-box object detection, and person keypoint detection.

Instance Segmentation: Based on COCO dataset, Mask R-CNN outperforms all categories comparing to MNC and FCIS which are state of the art model 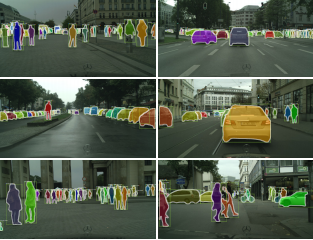 The use of these in medical imaging systems seems rather useful, but it can also be extended to more general CCTV camera systems which can also detect physiological patterns.

In the Human Pose Estimation section, we assume that Mask RCNN does not have any knowledge of human poses, and all the predictions are based on keypoints on human bodies, for example, left shoulder and right elbow. While in fact we may be able to achieve better performances here because currently this approach is strongly dependent on correct classifications of human body parts. That is, if the model messed up the position of left shoulder, the position estimation will be awful. It is important to remove the dependency on preceding predictions, so that even when previous steps fail, we may still expect a fair performance.

It will be interesting to see if applying dropout can boost this Mask RCNN architecture's performance.