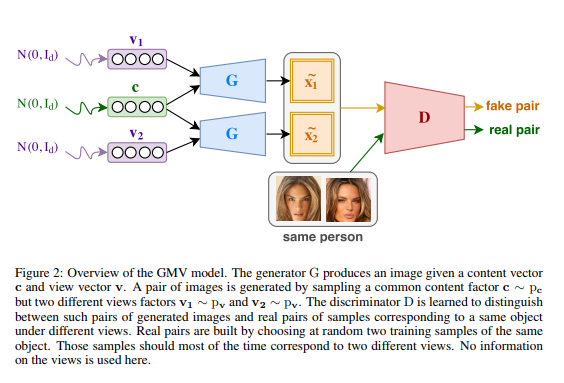 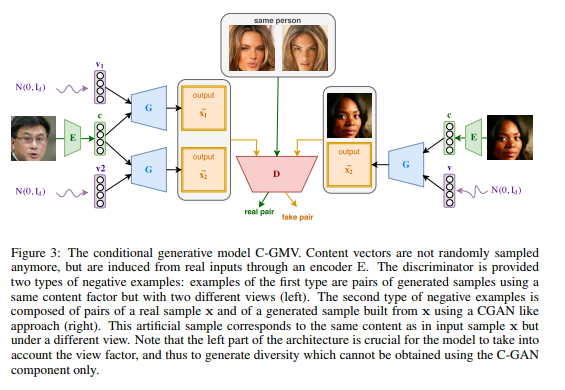 Datasets: The two models were evaluated by performing experiments over four image datasets of various domains. Note that when supervision is available on the views (like CelebA for example where images are labeled with attributes) it is not used for learning models. The only supervision that is used if two samples correspond or not to the same object.

Model Architecture: Same architectures for every dataset. The images were rescaled to 3×64×64 tensors. The generator G and the discriminator D follow that of the DCGAN implementation proposed in Radford et al. (2015).

Baselines: Most existing methods are learned on datasets with view labeling. To fairly compare with alternative models authors have built baselines working in the same conditions as our models. In addition models are compared with the model from Mathieu et al. (2016). Results gained with two implementations are reported, the first one based on the implementation provided by the authors2 (denoted Mathieu et al. (2016)), and the second one (denoted Mathieu et al. (2016) (DCGAN) ) that implements the same model using architectures inspired from DCGAN Radford et al. (2015), which is more stable and that was tuned to allow a fair comparison with our approach. For pure multi-view generative setting, generative model(GMV) is compared with standard GANs that are learned to approximate the joint generation of multiple samples: DCGANx2 is learned to output pairs of views over the same object, DCGANx4 is trained on quadruplets, and DCGANx8 on eight different views.

Figure 1 shows examples of generated images by our model and Figure 4 shows images sampled by DCGAN based models (DCGANx2, DCGANx4, and DCGANx8) on 3DChairs and CelebA datasets.

Figure 5 shows additional results, using the same presentation, for the GMV model only on two other datasets