To demonstrate the practical value of the proposed approach, the training data scheduling problem is chosen as an example. The authors show that by using the proposed method to adaptively select the most suitable training data, they can significantly improve the accuracy and convergence speed of various neural networks including multi-layer perceptron (MLP), convolutional neural networks (CNNs) and recurrent neural networks (RNNs), for different applications including image classification and text understanding.

The teaching model, denoted φ, tries to provide [math] D [/math], [math] L [/math], and [math] Ω [/math] (or any combination, denoted [math] A [/math]) to the student model such that the student model either achieves lower risk R(ω) or progresses as fast as possible.

The training phase consists of the teacher providing the student with the subset [math] A_{train} [/math] of [math] A [/math] and then taking feedback to improve its own parameters. The L2T process is outlined in figure below: 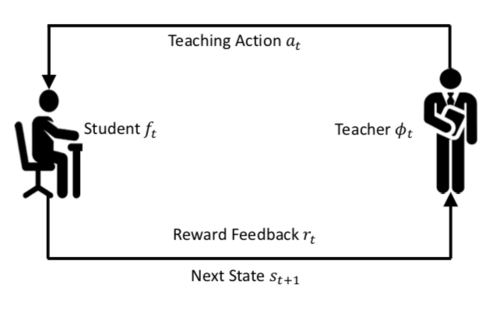 NoTeach: Outputting a good training set D, analogous to human teachers providing students with proper learning materials such as textbooks
Self-Paced Learning (SPL): Teaching by hardness of data, defined as the loss. This strategy begins by filtering out data with larger loss value to train the student with "easy" data and gradually increases the hardness.
L2T: The Learning to Teach framework.
RandTeach: Randomly filter data in each epoch according to the logged ratio of filtered data instances per epoch (as opposed to deliberate and dynamic filtering by L2T). 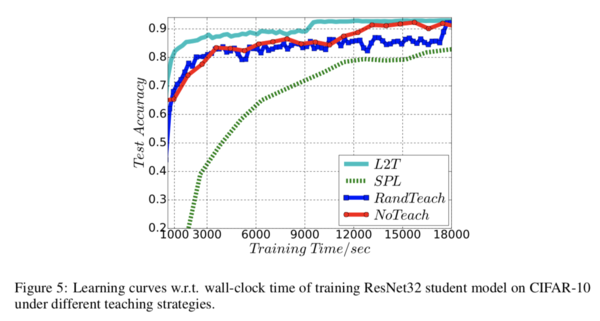 While the conceptual framework of L2T is sound, the paper only experimentally demonstrates efficacy for data teaching which would seem to be the simplest to implement. The feasibility and effectiveness of teaching the loss function and hypothesis space are not explored in a real-world scenario. Furthermore, the experimental results for data teaching suggest that the speed of convergence is the main improvement over other teaching strategies whereas the difference in accuracy less remarkable. The paper also assesses accuracy only by comparing L2T with NoTeach and SPL on the IMDB classification task, the improvement (or lack thereof) on the other classification tasks and teaching strategies is omitted. Again, this distinction is not possible to assess in loss function or hypothesis space teaching within the scope of this paper. They could have included larger datasets such as ImageNet and CIFAR100 in their experiments which would have provided some more insight.