Learning The Difference That Makes A Difference With Counterfactually-Augmented Data

This paper addresses the problem of building models for NLP tasks that are robust against spurious correlations in the data. The authors tackle this problem by introducing a human-in-the-loop method in which human annotators were hired to modify data in order to make it in a way that represents the opposite label. For example, if a text had a positive sentiment to it, the annotators change the text such that it represents the negative sentiment while making minimal changes to the text. They refer to this process as counterfactual augmentation. The authors apply this method to the IMDB sentiment dataset and to SNLI and show that many models can not perform well on the augmented dataset is trained only on the original dataset and vice versa. The human-in-the-loop system which is designed for counterfactually manipulating documents aims that by intervening only upon the factor of interest, they might disentangle the spurious and non-spurious associations, yielding classifiers that hold up better when spurious associations do not transport out of the domain. 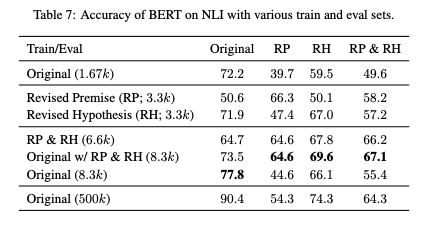