Feed-forward neural networks consist of several layers of neurons where each neuron in a layer applies a linear filter to the input image data and is passed on to the neurons in the next layer. When calculating the neuron’s output, scalar bias aka weights is applied to the filter with nonlinear activation function as parameters of the network that are learned by training data. There are several differences between Convolutional Neural networks and ordinary neural networks. First, CNN’s neurons are organized topographically into a bank and laid out on a 2D grid, so it reflects the organization of dimensions of the input data. Secondly, neurons in CNN apply filters which are local, and which are centered at the neuron’s location in the topographic organization. Meaning that useful metrics or clues to identify the object in an input image which can be found by examining local neighborhoods of the image. Next, all neurons in a bank apply the same filter at different locations in the input image. By looking at the image example. Green is an input to one neuron bank, yellow is filter bank, and pink is the output of one neuron bank (convolved feature). A bank of neurons in a CNN applies a convolution operation, aka filters, to its input where a single layer in a CNN typically has multiple banks of neurons, each performing a convolution with a different filter. The resulting neuron banks become distinct input channels into the next layer. The whole process reduces the net’s representational capacity, but also reduces the capacity to overfit.

Pooling layer summarizes the activities of local patches of neurons in the convolutional layer by subsampling the output of a convolutional layer. Pooling is useful for extracting dominant features, to decrease the computational power required to process the data through dimensionality reduction. The procedure of pooling goes on like this; output from convolutional layers is divided into sections called pooling units and they are laid out topographically, connected to a local neighborhood of other pooling units from the same convolutional output. Then, each pooling unit is computed with some function which could be maximum and average. Maximum pooling returns the maximum value from the section of the image covered by the pooling unit while average pooling returns the average of all the values inside the pooling unit (see example). In result, there are fewer total pooling units than convolutional unit outputs from the previous layer, this is due to larger spacing between pixels on pooling layers. Using the max-pooling function reduces the effect of outliers and improves generalization.

This network includes local response normalization layers which are implemented in lateral form and used on neurons with unbounded activations and permits the detection of high-frequency features with a big neuron response. This regularizer encourages competition among neurons belonging to different banks. Normalization is done by dividing the activity of a neuron in bank i at position (x,y) by the equation below, where the sum runs over N ‘adjacent’ banks of neurons at the same position as in the topographic organization of neuron bank. The constants, N, alpha and betas are hyper-parameters whose values are determined using a validation set. This technique is replaced by better techniques such as the combination of dropout and regularization methods (L1,and L2)

All of the neurons for this model use the max-with-zero nonlinearity where output within a neuron is computed as [math] function [/math] is the total input to the neuron. The reason they use nonlinearity is because it has several advantages over traditional saturating neuron models, such as significant reduction in training time required to reach a certain error rate. Another advantage is that nonlinearity reduces the need for contrast-normalization and data pre-processing since neurons do not saturate- meaning activities simply scale up little by little with usually large input values. For this model’s only pre-processing step, they subtract the mean activity from each pixel and the result is a centered data.

The objective function of their network maximizes the multinomial logistic regression objective which is the same as minimizing the average cross-entropy across training cases between the true label and the model’s predicted label.

It’s important to note that if a neuron always receives a negative value during training, it will not learn because its output is uniformly zero under the max-with-zero nonlinearity. Hence, the weights in their model were sampled from a zero-mean normal distribution with a high enough variance. High variance in weights will set a certain number of neurons with positive values for learning to happen, and in practice, it’s necessary to try out several candidates for variances until a working initialization is found. In their experiment, setting a positive constant, or 1, as biases of the neurons in the hidden layers was helpful in finding it.

In this model, a batch size of 128 samples and momentum of 0.9, we train our model using stochastic gradient descent. The update rule for weight w is [math] 3232 [/math], where i is the iteration index, v is a momentum variable, e is the learning rate and dE/dw is the average over the ith batch of the derivative of the objective with respect to w_i. The whole training process on CIFAR-10 takes roughly 90minuts and ImageNet takes 4 days with dropout and two days without. 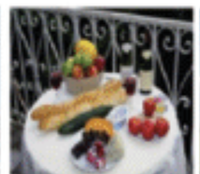 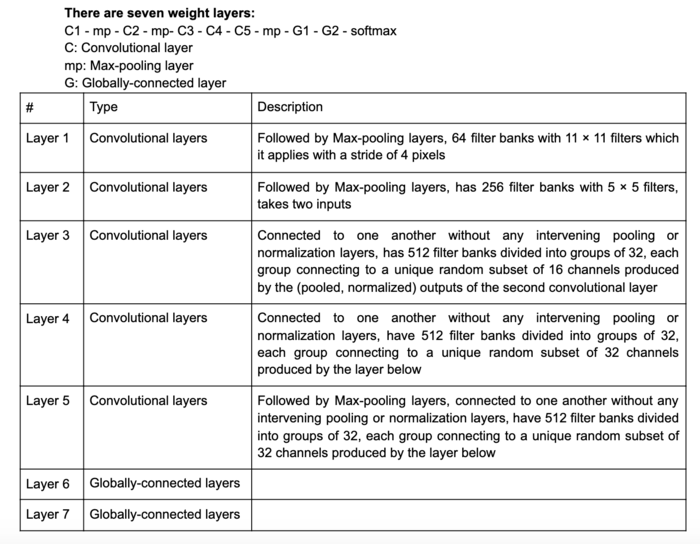 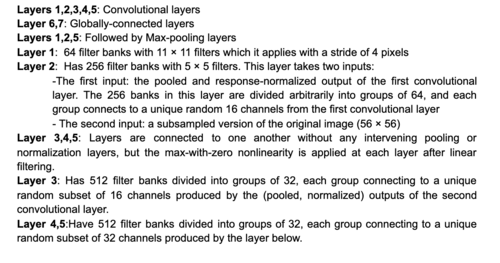