Recently, visual-attention based models have gained traction for VQA tasks, where the attention mechanism typically produces a spatial map highlighting image regions relevant for answering the visual question about the image. However, to correctly answer the question, the machine not only needs to understand or "attend" regions in the image but also parts of the question as well. In this paper, authors have proposed a novel co-attention technique to combine "where to look" or visual-attention along with "what words to listen to" or question-attention VQA allowing their model to jointly reasons about image and question thus improving upon existing state of the art results. They also propose a novel convolution-pooling strategy to adaptively select phrase sizes whose representations are passed to the question level. 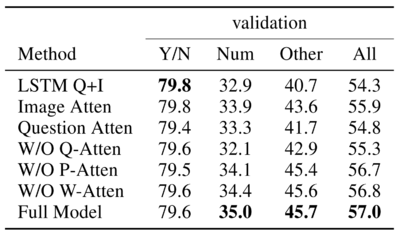