Difference between revisions of "GradientLess Descent"

In this presentation, we are interested in minimising a smooth convex function without ever computing its derivatives.

A general optimisation question can be formulated by asking to minimise an objective function [math]f : \mathbb{R}^n \to \mathbb{R}[/math], which means finding: \begin{align*} x^* = \mathrm{argmin}_{x \in \mathbb{R}^n} f(x) \end{align*}

Depending on the nature of [math]f[/math], different settings may be considered:

For the purpose of this paper, we consider convex smooth objective noiseless functions, where we have access to function computations but not gradient computations. This class of functions is quite common in practice; for instance, they make special appearances in the reinforcement learning literature.

We remark that if [math]f[/math] is twice continuously differentiable, then this is simply equivalent to the eigenvalues of the Hessian matrix [math]\textbf{H}(f)[/math] being bounded between [math]\alpha[/math] and [math]\beta[/math]. Further intuition can be gained from the image below, showing how such a function can be contained within quadratic bounds. 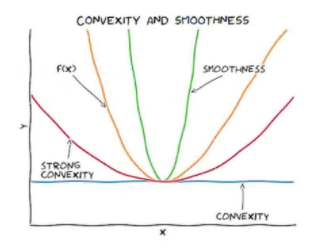 Relationship between convexity and smoothness.

In convex analysis, one usually says that a function has condition number [math]Q[/math] if it is both [math]\alpha[/math]-strongly convex, and [math]\beta[/math]-smooth, and [math]\frac{\beta}{\alpha} \leq Q[/math]. The authors of this paper consider the more general case where [math]f[/math] is a monotone transformation of an [math]\alpha[/math]-strongly convex and [math]\beta[/math]-smooth function; for simplicity and transparency, we shall not consider these extensions here, but shall note that their proofs are quite elementary.

In zeroth-order optimisation, we are interested in minimising a function without computing its derivatives. This is important in many practical applications in which derivatives may not be available, or they may be difficult to compute, such as:

Curiously, a large amount of this approach focuses on approximating gradients and then using first-order optimisation algorithms.

The proposed algorithm is given in the picture below.

Observe that at each step, we perform a binary search over several concentric circles and randomly sample points, in the hopes that if we take a small step in a random direction this will reduce the value of the objective function.

The correctness of this algorithm hinges on two observations. The first one is about the volume of the intersection of high-dimensional balls; we call this intersection a hyperspherical cap.

Using this theorem about random searches in high dimensions, we can prove the correctness of our algorithm.

Notice how the second theorem implies that with a quarter probability, [math]f(y)[/math] is closer to the optimum,[math] f(x^*), [/math] than [math]f(x)[/math] is.

For proof of these theorems, please watch my talk.

In the current form of GradientLess Descent Algorithm presented here, the lower and upper limits of the search radius i.e. [math][r, R][/math] remain unchanged for the entire run of the algorithm. As proven by the correctness of this algorithm, this does ensure convergence but this version of the algorithm does not take advantage of the upper bound of the condition number [math]Q[/math] and therefore, has an extra factor of [math]\log \frac{1}{\epsilon}[/math] in its overall cost.

A variation of this algorithm termed Gradientless Descent with Fast Binary Search (GLD-Fast), eliminates this additional factor from the overall cost through reduction in the range of the binary search by shrinking [math]R[/math] in half after every [math]H[/math] iterations (where [math]H[/math] is determined by [math]Q[/math]).

For determining K and H, use the following equations:

We compare the GradientLess Descent algorithm to a benchmark established by the Augmented Randomised Search algorithm proposed in 2011.

For this comparison, we defined the function [math]f(x) = \frac{1}{2} x^T H x [/math] where [math]H[/math] is a diagonal matrix with eigenvalues linearly interpolating the interval [math][\alpha , \beta][/math]. We observe that in most scenarios, GradientLess Descent beats the benchmark.

This research paper has analysed a randomised algorithm where a search direction is sampled from the standard Gaussian. This is a direct search-based algorithm, which yields the convergence rate that is polylogarithmically dependent on dimensionality for any monotone transform of a smooth and strongly convex objective with a low-dimensional structure. In this algorithm, the step-size is considered as an approximate line to search all the possible values of a grid spanning an interval with uniform spacing on a log-scale. They show a geometric decrease of the function value regret, up to a constant defined by the minimum step-size, on strongly convex functions with Lipschitz smooth gradient.

In response to the above comments:

This algorithm has many practical applications especially in the field of reinforcement learning. A major concept in reinforcement learning is the concept of a reward function (which we either wish to minimise or maximise). In particular, the reward function may be hidden behind a black box. For example, consider a "theoretical" slot machine where we only see how much money we get if we win, but do not know how the amount is determined. It is true that in general, these objective functions may not be smooth or strongly convex, but one is able to either make certain assumptions about the reward function or relax certain conditions about the state of the world in order to create a reward function that is smooth or convex. Additionally, certain gradients may not have an analytical form, in which case numerical calculation for gradients may be computationally expensive. This method allows a way to bypass the gradient computations altogether!

To back the response: They have demonstrated that their algorithm can be successfully applied to MuJoCo benchmarks, where the objective function is not strongly convex and smooth. - providing more graphical representation in proving lemmas, would make the paper more fathomable.

2 - Currently only a single synthetic function is observed and experimented within the paper ( It is also under a single monotone exponential transformation ). Using a different function we would be sure the algorithm works well in practice.