Continual Learning (CL) refers to the problem where different tasks are fed to a model sequentially, such as training a natural language processing model on different languages over time. A major challenge in CL is that a model forgets how to solve earlier tasks. This paper proposed a new framework to regularise CL so that it does not forget previously learned tasks. This method, referred to as functional regularisation for Continual Learning, leverages the Gaussian process to construct an approximate posterior belief over the underlying task-specific function. The posterior belief is then used in optimisation as a regulariser to prevent the model from completely deviating from the earlier tasks. The estimation of the posterior functions is carried out under the framework of approximate Bayesian inference.

Using the above proposition, one simple example of a Gaussian process is a Brownian bridge, defined as [math]Y_t = (1-t) \int_0^t \frac{dB_s}{1-s}[/math] for [math]0 \leq t \lt 1[/math]. This process can be proved to be Gaussian using the proposition proved above.

Consider a deep neural network in which the final hidden layer provides the feature vector [math]\phi(x;\theta)\in \mathbb{R}^K[/math], where [math]x[/math] is the input data and [math]\theta[/math] are the task-shared model parameters. Importantly, let's assume the task boundaries are known. That is, we know when the input data is switched to a new task. Taking the NLP model as an example, this is equivalent to assuming we know whether each batch of data belongs to English, French, or German datasets. This assumption is important because it allows us to know when to update the task-shared parameter [math]\theta[/math]. The authors also discussed how to detect task boundaries when they are not given, which will be presented later in this summary. 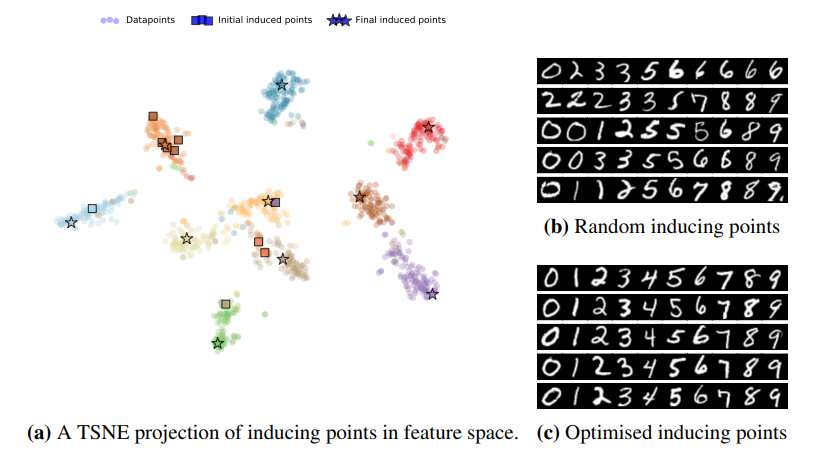 The proposed method was applied to two MNIST-variation datasets (in Table 1) and the more challenging Omniglot [7] benchmark (in Table 2). They compared the method with randomly selected inducing points, denoted by FRCL(RANDOM), and the method with inducing points optimised using trace criterion, denoted by FRCL(TRACE). The baseline method corresponds to a simple replay-buffer method described in the appendix of the paper. Both tables show that the proposed method gives strong results, setting a new state-of-the-art result on both Permuted-MNIST and Omniglot.

The proposed method unifies both the regularisation-based method and the replay/rehearsal method in continual learning. It was able to overcome the disadvantages of both methods. Moreover, the Bayesian framework allows a probabilistic interpretation of deep neural networks. From the experiments we can make the following conclusions:

The problem of balancing short term and long term memory of rewards is an important problem in reinforcement learning. It would be interesting to consider the applications of this algorithm and its variants to reinforcement learning problems. Additionally, for problems where the rewards may change over time, it would be interesting to compare this method to some of the existing ones.

A useful resource for more continual learning in general is the following GitHub page: link continual_learning_papers