Usually, machine learning models are minimized in their average loss to achieve high overall accuracy. While this works well for the majority, minority groups that use the system suffer high error rates because they contribute fewer data to the model. For example, non-native speakers may contribute less to the speech recognizer machine learning model. This phenomenon is known as representation disparity and has been observed in many models that, for instance, recognize faces, or identify the language. This disparity further widens for minority users who suffer higher error rates, as they will lower usage of the system in the future. As a result, minority groups provide even less data for future optimization of the model. When unbalanced group risk gets worse over time this is referred to as disparity amplification.

Although this approach has shown to help alleviate the demographic bias, having one or more dedicated features to categorize the population is indeed a challenging task difficult to maintain mainly due to privacy concerns. Especially considering that as time goes on data is expected to become less reliant on what some people call private life features such as gender, political opinions, race, among others.

If input queries are made by users from [math]K[/math] latent groups, then the distribution over all queries can be re-written as [math]Z \sim P := \sum_{k \in [K]} \alpha_kP_k[/math], where [math]\alpha_k[/math] is the population portion of group [math]k[/math] and [math]P_k[/math] is its individual distribution, and we assume these two variables are unknown.

To put simply, the number of expected users of a group depends on the number of new users of that group and the fraction of users that continue to use the system from the previous optimization step. If fewer users from minority groups return to the model (i.e. the model has a low retention rate of minority group users), Hashimoto et al. argue that the representation disparity amplifies. The decrease in user retention for the minority group is exacerbated over time since once a group shrinks sufficiently, it receives higher losses relative to others, leading to even fewer samples from the group. 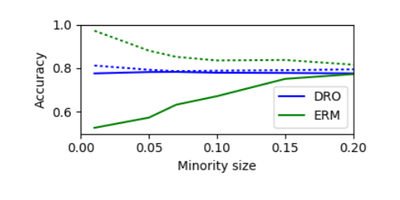 It is a surprising result that the minority group has higher satisfaction and retention under DRO. Analysis of long-form comments from Turkers attribute this phenomenon to to users valuing the model’s ability to complete slang more highly than completion of common words, and indicates a slight mismatch between the authors' training loss and human satisfaction with an autocomplete system.