In this paper, the authors are interested a field of problems called extreme classification. These problems involve training a classifier to give the most relevant tags for any given text; the difficulties arise from the fact that the label set is so large so that most models would fail. The authors propose a new model called APLC-XLNet which fine-tunes the generalized autoregressive pre-trained model (XLNet) by using Adaptive Probabilistic Label Clusters (APLC) to calculate cross-entropy loss. This method takes advantage of unbalanced label distributions by forming clusters to reduce training time. The authors experimented on five different datasets and showed that their method far outweighs the existing state-of-the-art models.

Extreme multi-label text classification (XMTC) has applications in many recent problems such as providing word representations of a large vocabulary [1], tagging Wikipedia with relevant labels [2], and giving product descriptions for search advertisements [3]. The authors are motivated by the shortcomings of traditional methods in the creation of XMTC. For example, one such method of classifying text is the bag-of-words (BOW) approach where a vector represents the frequency of a word in a corpus. However, BOW does not consider the location of the words so it cannot determine context and semantics. Motivated by the success of transfer learning in a wide range of natural language processing (NLP) problems, the authors propose to adapt XLNet [4] to the XMTC problem. The final challenge is the nature of the labeling distribution can be very sparse for some labels. The authors solve this problem by combining the Probabilistic Label Tree [5] method and the Adaptive Softmax [6] to propose APLC.

Intuitively, researchers can apply the one-vs-all approach in which they can fit a classifier for each label and thus XMTC reduces to a binary classification problem. This technique has been shown to achieve high accuracy; however, due to a large number of labels, this approach is very computationally expensive. There have been some techniques to reduce the complexity by pruning weights (PDSparse) to induce sparsity but still, this method is quite expensive. PPDSparse was introduced to parallelize PDSparse in a large-scaled distributed setting. Additionally, DiSMEC was introduced as another extension to PDSparse that allows for a distributed and parallel training mechanism which can be done efficiently by a novel negative sampling technique in addition to the pruning of spurious weights. Another approach is to simply apply a dimensional reduction technique on the label space. However, doing so has shown to have serious negative effects on the prediction accuracy due to loss of information in the compression phase. Finally, another approach is to use a tree to partition labels into groups based on similarity. This approach has shown to be quite fast but unfortunately, due to the problems with BOW methods, the accuracy is poor.

APLC-XLNet consists of three parts: the pre-trained XLNet-Base as the base, the APLC output layer, and a fully connected hidden layer connecting the pooling layer of XLNet as the output layer, as it can be seen in figure 1. To recap, XLNet [8] is a generalized autoregressive pretraining language model based upon capturing bidirectional contexts through maximizing the expected likelihood over all permutations of the factorization 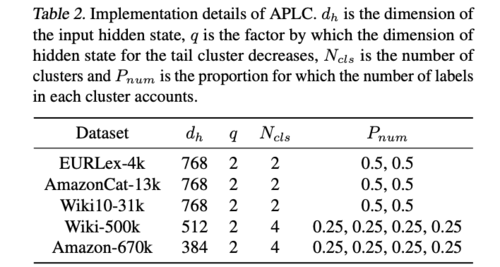 The Source Code for the paper can be found here: https://github.com/huiyegit/APLC_XLNet

The authors have proposed a new deep learning approach to solve the XMTC problem based on XLNet, namely, APLC-XLNet. APLC-XLNet consists of three parts: the pretrained XLNet that takes the input of the text, a connecting hidden layer, and finally an APLC output layer to give the rankings of relevant labels. Their experiments show that APLC-XLNet has better results in several benchmark datasets over the current state-of-the-art models.

The authors chose to use the same architecture for every dataset. The model does not achieve state-of-the-art performance on the larger datasets. Perhaps, a more complex model in the second part of the model could help achieve better results. The authors also put a lot of effort in explaining the model complexity for APLC-XLNet but does not compare it other state-of-the-art models. A table of model parameters and complexity for each model could be helpful in explaining why their techniques are efficient.

In their implementation, the label set was partitioned into clusters in a heuristic manner by experimenting different number of clusters and partition proportion. There might be a better model-based method to choose the partition structure.