This page will be published for editing by EOD 7th Nov 2017 This page is a summary for NIPS 2016 paper - Dialog-based Language Learning by Jason Weston[1].

I,G,O and R can all potentially be learned components and make use of any ideas from the existing machine learning literature.

When the components I,G,O, & R are neural networks, the authors describe the resulting system as a Memory Neural Network (MemNN). They build a MemNN for QA (question answering) problems and compare it to RNNs (Recurrent Neural Network) and LSTMs (Long Short Term Memory RNNs) and find that it gives superior performance.

Supervised learning from dialogs using neural models: A. Sordoni et al [2015] has used neural networks for response generation that can be trained end to end on large quantities of unstructured Twitter conversations. However this does not incorporate feedback from dialog partner during real time conversation

For testing their models, the authors chose two datasets (i) the single supporting fact problem from the bAbI datasets [23] which consists of short stories from a simulated world followed by questions; and (ii) the MovieQA dataset [3] which is a large-scale dataset (∼ 100k questions over ∼ 75k entities) based on questions with answers in the open movie database (OMDb)

For each task a fixed policy is considered for performing actions (answering questions) which gets questions correct with probability πacc (i.e. the chance of getting the red text correct in Figs. 1 and 2). We thus can compare different learning algorithms for each task over different values of πacc (0.5, 0.1 and 0.01). In all cases a training, validation and test set is provided.

All of these approaches with the same model architecture: an end-to-end memory network (MemN2N) [20], which has been used as a baseline model for exploring differing modes of learning. 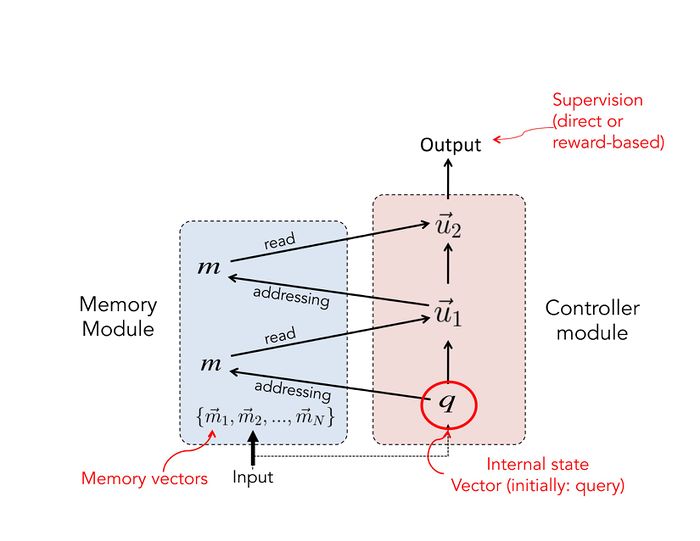 The input is the last utterance of the dialog, x, as well as a set of memories (context) (c1, . . . , cN ) which can encode both short-term memory, e.g. recent previous utterances and replies, and long-term memories, e.g. facts that could be useful for answering questions. The context inputs ci are converted into vectors mi via embeddings and are stored in the memory. The goal is to produce an output aˆ by processing the input x and using that to address and read from the memory, m, possibly multiple times, in order to form a coherent reply. In the figure the memory is read twice, which is termed multiple “hops” of attention.

In the first step, the input x is embedded using a matrix A of size d × V where d is the embedding dimension and V is the size of the vocabulary, giving q = Ax, where the input x is as a bag-of words vector. Each memory ci is embedded using the same matrix, giving mi = Aci . The output of addressing and then reading from memory in the first hop is:

Here, the match between the input and the memories is computed by taking the inner product followed by a softmax, yielding p 1 , giving a probability vector over the memories. The goal is to select memories relevant to the last utterance x, i.e. the most relevant have large values of p 1 i . The output memory representation o1 is then constructed using the weighted sum of memories, i.e. weighted by p 1 . The memory output is then added to the original input, u1 = R1(o1 + q), to form the new state of the controller, where R1 is a d × d rotation matrix2 . The attention over the memory can then be repeated using u1 instead of q as the addressing vector, yielding:

The controller state is updated again with u2 = R2(o2 + u1), where R2 is another d × d matrix to be learnt. In a two-hop model the final output is then defined as:

where there are C candidate answers in y. In our experiments C is the set of actions that occur in the training set for the bAbI tasks, and for MovieQA it is the set of words retrieved from the KB. 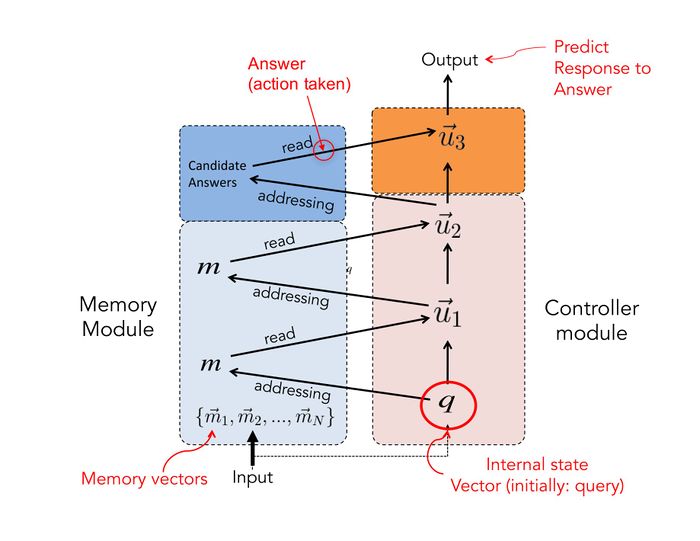 As our reward-based imitation learning uses the architecture of Fig. 3 (a), and forward prediction uses the same architecture but with the additional layers of Fig 3 (b), we can learn jointly with both strategies. The former makes use of the reward signal – which when available is a very useful signal – but fails to use potential supervision feedback in the subsequent utterances, as described above. It also effectively ignores dialogs carrying no reward. Forward prediction in contrast makes use of dialog-based feedback and can train without any reward. On the other hand not using rewards when available is a serious handicap. Hence, the mixture of both strategies is a potentially powerful combination.

We conducted experiments on the datasets described in Section 3. As described before, for each task we consider a fixed policy for performing actions (answering questions) which gets questions correct with probability πacc. We can thus compare the different training strategies described in Sec. 4 over each task for different values of πacc. Hyperparameters for all methods are optimized on the validation sets.