Reinforcement learning: Reinforcement learning works on dialogs[8][9], often consider reward as the feedback model rather than exploiting the dialog feedback per se. To be more specific, the reinforcement learning utilizes the system of rewards or what the authors from paper [8] called “trail-and-error”. The learning agent (in this case the language-learning agent) interacts with the dynamic environment (in this case through active dialog) and it receives feedback in the form of positive or negative rewards. By setting the objective function as maximizing the rewards, the model can be trained without explicit y responses. The reason why such algorithm is not particularly efficient in training a dialog-based language learning model is that there’s no explicit/fixed threshold of a positive or negative reward. One possible way to measure such action is define what a successful completion of a dialog should be and use that as the objective function. 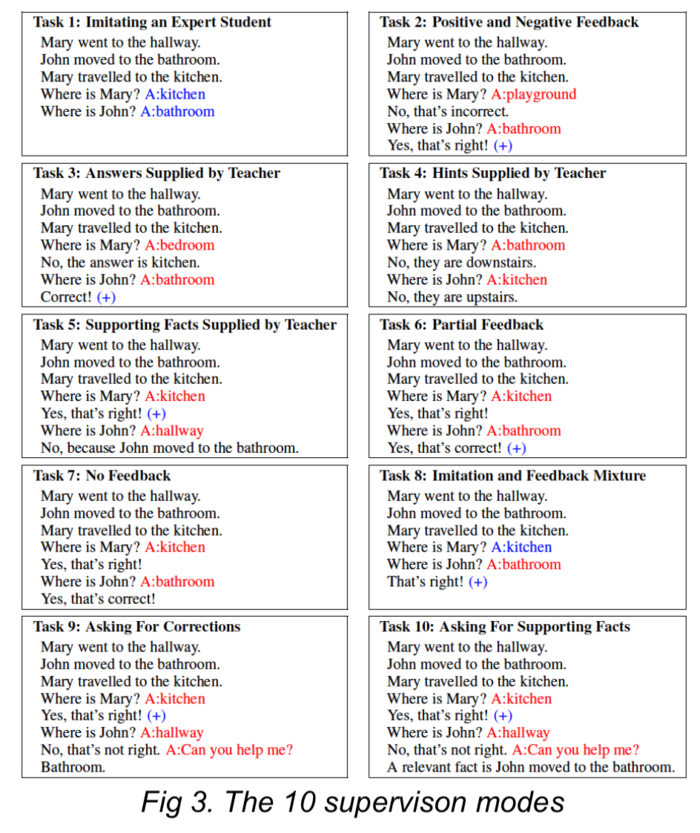 For each task a fixed policy is considered for performing actions (answering questions) which gets questions correct with probability $π_{acc}$ (i.e. the chance of getting the red text correct in Figs. 3 and 4). We thus can compare different learning algorithms for each task over different values of $π_{acc}$ (0.5, 0.1 and 0.01). In all cases a training, validation and test set is provided. For the bAbI dataset this consists of 1000, 100 and 1000 questions respectively per task, and for movieQA there are ∼ 96k, ∼ 10k and ∼ 10k respectively. MovieQA also includes a knowledge base (KB) of ∼ 85k facts from OMDB(Open Movie Database), the memory network model we employ uses inverted index retrieval based on the question to form relevant memories from this set. 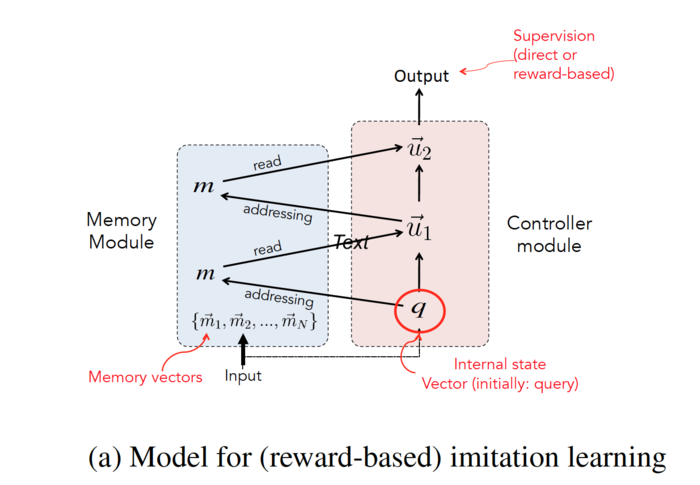 The aim is, given an utterance $x$ from speaker 1 and an answer $a$ by speaker 2 (i.e., the learner), to predict $\bar{x}$, the response to the answer from speaker 1. That is, in general to predict the changed state of the world after action $a$, which in this case involves the new utterance $\bar{x}$.