Open-domain question answering is a task that finds answers to questions from a large collection of documents. Nowadays, open-domain QA systems usually use a two-stage framework: (1) a retriever that selects a subset of documents, and (2) a reader that fully reads the document subset and selects the answer spans. Stage one (1) is usually done through bag-of-words models, which count overlapping words and their frequencies in documents. Each document is represented by a high-dimensional, sparse vector. A common bag-of-words method that has been used for years is BM25, which ranks all documents based on the query terms appearing in each document. Stage one produces a small subset of documents where the answer might appear (high recall), and then in stage two, a reader would read the subset and locate the answer spans (high precision). Stage two is usually done through neural models, like Bert. While stage two benefits a lot from the recent advancement of neural language models, stage one still relies on traditional term-based models. This paper tries to improve stage one by using dense retrieval methods that generate dense, latent semantic document embedding and demonstrates that dense retrieval methods can not only outperform BM25, but also improve the end-to-end question answering (QA) accuracies. An interesting area of research that has expanded in the domain of QA is to the ability of a model to also assign a confidence score for its answer to the question.

This paper focuses on improving the retrieval component and proposed a framework called Dense Passage Retriever (DPR) which aims to efficiently retrieve the top K most relevant passages from a large passage collection. The key component of DPR is a dual-BERT model that encodes queries and passages in a vector space where relevant pairs of queries and passages are closer than irrelevant ones. The authors used the following similarity metric between the question and the passage: \begin{equation} sim(q,p) = E_Q(q)^TE_P(p) \end{equation}

Of course, this is not the only possible metric; any similarity metric that is decomposable is sufficient. Many of these are some sort of transformation of the Euclidean distance. The authors experimented with other similarity metrics but found comparable results so they decided to use the simplest to focus on learning better encoders.

DPR has two independent BERT encoders: a query encoder Eq, and a passage encoder Ep. They map each input sentence to a d dimensional real-valued vector, and the similarity between a query and a passage is defined as the dot product of their vectors. DPR uses the [CLS] token output as embedding vectors, so d = 768. This can be thought of as an elegant way to take the last hidden layer's weights from BERT as a representation of the input. During the inference time, they used FAISS (Johnson et al., 2017) for the similarity search, which can be efficiently applied on billions of dense vectors

The authors pre-processed Wikipedia documents, i.e. they removed semi-structured data, such as tables, info- boxes, lists, as well as the disambiguation pages, and then split each document into passages of length 100 words. These passages form a candidate pool. The five QA datasets described below were used to build the train data.

To build the training data, the authors match each question in the five datasets with a passage that contains the correct answer. The dataset statistics are summarized below.

The authors trained DPR on five datasets separately, and on the combined dataset. They compared DPR performance with the performance of the term-frequency based model BM25, and BM25+DPR. The DPR performance is evaluated in terms of retrieval accuracy, ablation study, qualitative analysis, and run-time efficiency.

The table below compares the top-k (for k=20 or k=100) accuracies of different retrieval systems on various popular QA datasets. Top-k accuracy is the percentage of examples in the test set for which the correct outcome occurs in the k most likely outcomes as predicted by the network. As can be seen, DPR consistently outperforms BM25 on all datasets, with the exception of SQuAD. Additionally, DPR tends to perform particularly well when a smaller k value is chosen. The authors speculated that the lower performance of DPR on SQuAD was for two reasons inherent to the dataset itself. First, the SQuAD dataset has a high lexical overlap between passages and questions. Second, the dataset is biased because it is collected from a small number of Wikipedia articles - a point which has been argued by other researchers as well.

Three training schemes are evaluated on the development dataset. The first scheme, which is the standard 1-to-N training setting, is to pair each query with one positive passage and n negative passages. As mentioned before, there are three ways to select negative passages: random, BM25, and gold. The results showed that in this setting, the choices of negative passages did not have a strong impact on the model's performance. The top block of the table below shows the retrieval accuracy in the 1-to-N setting. The second scheme, which is called an in-batch negative setting, is to use positive passages for other queries in the same batch as negatives. The middle block shows the in-batch negative training results. The performance is significantly improved compared to the first setting. The last scheme is to augment in-batch negative with addition hard negative passages that are highly ranked by BM25 but do not contain the correct answer. The bottom block shows the result for this setting, and the authors found that adding one addition BM25 hard negatives works the best.

(3) Similarity and loss In this paper, the similarity between a query and a passage is measured by the dot product of the two vectors, and the loss function is defined as the negative log likelihood of the positive passages. The authors experimented with other similarity functions such as L2-norm and cosine distance, and other loss functions such as triplet loss. The results showed these options didn't appreciably improve model performance.

Since BM25 is a bag-of-words method that ranks passages based on term-frequency, it's good at exact keywords and phrase matching, while DPR can capture lexical variants and semantic relationships. Generally, DPR outperforms BM25 on the test sets.

The authors evaluated DPR on end-to-end QA systems (i.e., retriever + neural reader). The results showed that higher retriever accuracy typically leads to better final QA results, and the passages retrieved by DPR are more likely to contain the correct answers. As shown in the table below, QA systems using DPR generally perform better, except for SQuAD. 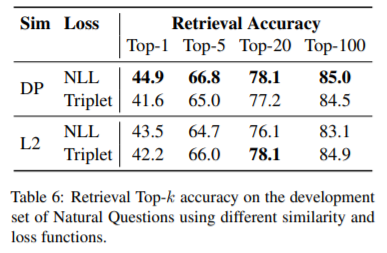 The reader would score the subset of [math]k[/math] passages that were retrieved using DPR. Next, the reader would extract an answer span from each passage and assign a spam score. The best span from the passage with the highest selection score is chosen as the final answer. To calculate these scores linear layers followed by a softmax are applied on top of the BERT output as follows:

During training, from the top 100 passages, one positive and m-1 negative passages. The hyperparameter m is set to 24 for all experiments. The marginal log-likelihood is maximized as the training objective. A batch size of 16 is used for large (NQ, TriviaQA, SQuAD) and 4 for small (TREC, WQ) datasets.

"Hugging Face" is also a popular and standard python package for NLP tasks.

The bag of words method is an old out-dated retriever approach. The paper could have exploited results from other state-of-the-art algorithms (e.g Golden retriever) and compared the proposed method with them. Other modern methods such as ElasticSearch are also not considered for retrieval.

Since SQuAD is usually the de facto standard for comparing question-answer tasks (being the largest and most commonly used dataset), the fact that DPR does not outperform on SQuAD should raise suspicion.