An end-to-end monocular VO model is proposed by utilizing deep Recurrence Convolutional Neural Network (RCNN). Figure 2 depicts the end-to-end model, which is comprised of three main stages. First, the model takes a monocular video as input and pre-processes the image sequences by “subtracting the mean RGB values of all frames” from each frame. Then, consecutive image sequences are stacked to form tensors, which become the inputs for the CNN stage. The purpose of the CNN stages is to extract salient features from the image tensors. The structure of the CNN is inspired by FlowNet [24], which is a model designed to extract optical flows. Details of the CNN structure is shown in Table 1. Using CNN optical flow features as input, the RNN stage tries to estimate the temporal and sequential relations among the features. The RNN stage does this by utilizing two Long Short-Term Memory networks (LSTM), which estimate object poses for each time step using both long-term and short-term dependencies. Figure 3 illustrates the RNN architecture.

To learn the hyperparameters [math]\theta[/math] of the DNNs, the loss function that is composed of Mean Square Error (MSE) of all positions p and orientations [math]\varphi[/math] minimizes: 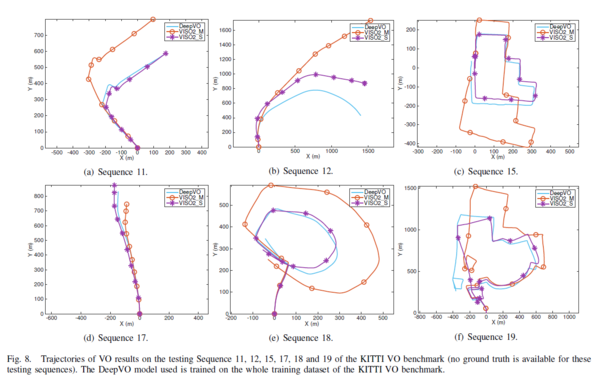