As the use of machine intelligence has increased , robustness has become a critical feature to guarantee the reliability of deployed machine-learning systems. However, recent research has shown that existing models are not robust to small , adversarial designed perturbations of the input. Adversarial examples are inputs to Machine Learning models that an attacker has intentionally designed to cause the model to make a mistake.Adversarially perturbed examples have been deployed to attack image classification services (Liu et al., 2016)[11], speech recognition systems (Cisse et al., 2017a)[12], and robot vision (Melis et al., 2017)[13]. The existence of these adversarial examples has motivated proposals for approaches that increase the robustness of learning systems to such examples Below example (Goodfellow et. al) [17], a small perturbation when applied to original image of panda, the prediction is changed to gibbon.

1. Fast Gradient Sign Method (FGSM; Goodfellow et al. (2015)) [17]: Given a source input x, and true label y, and let l be the differentiable loss function used to train the classifier h(.). Then the corresponding adversarial example is given by:

3. DeepFool ((Moosavi-Dezfooliet al., 2016) [15] projects x onto a linearization of the decision boundary defined by h(.) for M iterations.It is given as:

4. Carlini-Wagner's L2 attack:(CW-L2; Carlini & Wagner (2017)) [16] is an optimization-based attack that combines a differentiable surrogate for the model’s classification accuracy with an L2-penalty term.Let Z(x) be the operation that computes the logit vector (i.e., the output before the softmax layer) for an input x, and Z(x)k be the logit value corresponding to class k. The untargeted variant of CW-L2 finds a solution to the unconstrained optimization problem. It is given as: 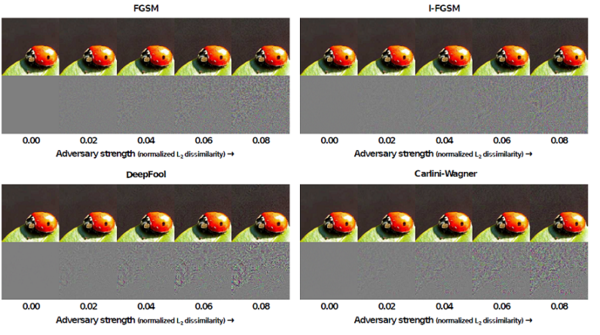 Below figure shows the difference between the set up in different experiments below. The network is either trained on a) regular images or b) transformed images. The different settings are marked by 7.1, 7.2 and 7.3

This experiment applies transformation on adversarial images at test time before feeding them to a ResNet -50 which was trained to classify clean images. Below figure shows the results for five different transformations applied and their corresponding Top-1 accuracy.Few of the interesting observations from the plot are:All of the image transformations partly eliminate the effects of the attack, Crop ensemble gives the best accuracy around 40-60 percent. Accuracy of Image Quilting Defense hardly deteriorates as the strength of the adversary increases. 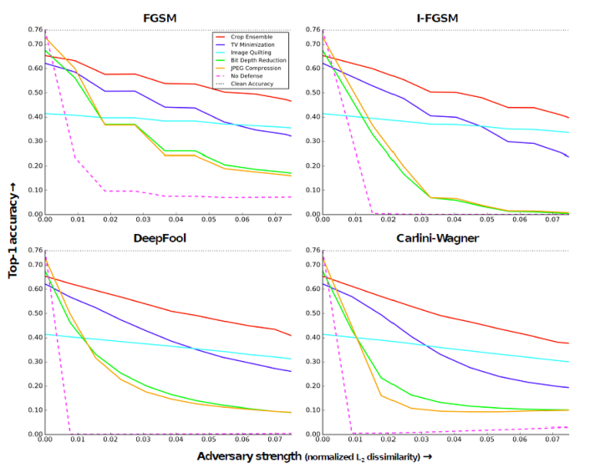 ResNet-50 model was trained on transformed ImageNet Training images. Before feeding the images to the network for training, standard data augmentation (from He et al) along with bit depth reduction, JPEG Compression, TV Minimzation, or Image Quilting were applied on the images. The classification accuracy on the same adversarial images as in previous case is shown Figure below. (Adversary cannot get this trained model to generate new images - Hence this is assumed as a Black Box setting!). Below figure concludes that training Convolutional Neural Networks on images that are transformed in the same way at test time, dramatically improves the effectiveness of all transformation defenses. Nearly 80 -90 % of the attacks are defended successfully, even when the L2- dissimilarity is high. 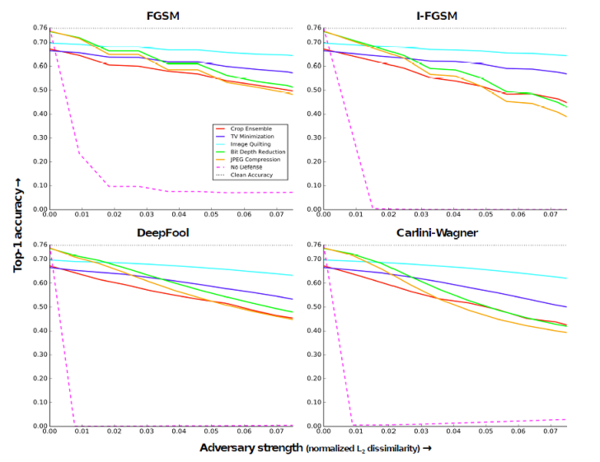 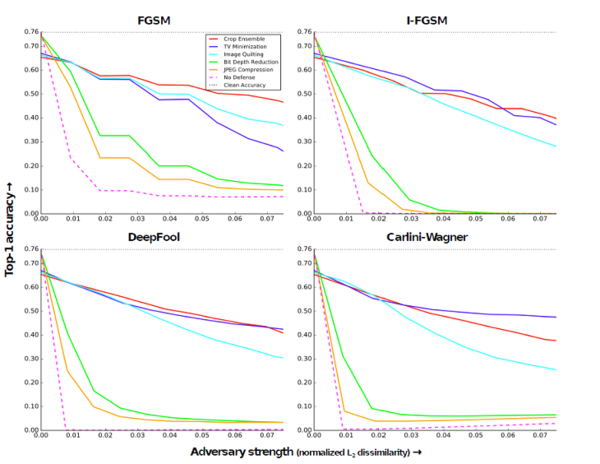 The paper proposed reasonable approaches to countering adversarial images. The authors evaluated Total Variance Minimization and Image Quilting , and compared it with already proposed ideas like Image Cropping- Rescaling, Bit Depth Reduction , JPEG Compression and Decompression on the challenging ImageNet dataset. Previous work by (Wang et al) [10] , shows that a strong input defense should , be non differentiable and randomized. Two of the defenses - namely Total Variation Minimization and Image Quilting, both possess this property. Future work suggests applying same techniques to other domains such as speech recognition and image segmentation. The input transformations can also be studied with ensemble adversarial training by Tramèr et al.[2]

16. Nicholas Carlini and David A. Wagner. Towards evaluating the robustness of neural networks. In IEEE Symposium on Security and Privacy, pp. 39–57, 2017.