Difference between revisions of "CapsuleNets"

Ever since AlexNet eclipsed the performance of competing architectures in the 2012 ImageNet challenge, convolutional neural networks have maintained their dominance in computer vision applications. Despite the recent successes and innovations brought about by convolutional neural networks, some assumptions made in these networks are perhaps unwarranted and deficient. Using a novel neural network architecture, the authors create CapsuleNets, a network that they claim is able to learn image representations in a more robust, human-like manner. With only a 3 layer capsule network, they achieved near state-of-the-art results on MNIST.

To the human eye, the image appears to be a panda both before and after noise is injected into the image, whereas the trained ConvNet model discerns the noisy image as a Gibbon with almost 100% certainty. The fact that the network is unable to classify the above image as a panda after the epsilon perturbation leads to many potential security risks in AI dependent systems such as self-driving vehicles. Although various methods have been suggested to combat adversarial examples, robust defences are hard to construct due to the inherent difficulties in constructing theoretical models for the adversarial example crafting process. However, beyond the fact that these examples may serve as a security threat, it emphasizes that these convolutional neural networks do not learn image classification/object detection patterns the same way that a human would. Rather than identifying the core features of a panda such as: its eyes, mouth, nose, and the gradient changes in its black/white fur, the convolutional neural network seems to be learning image representations in a completely different manner. Deep learning researchers often attempt to model neural networks after human learning, and it is clear that further steps must be taken to robustify ConvNets against targeted noise perturbations.

Hinton claims that the key fault with traditional CNNs lies within the pooling function. Although pooling builds translational invariance into the network, it fails to preserve spatial relationships between objects. When we pool, we effectively reduce a kxk kernel of convolved cells into a scalar input. This results in a desired local invariance without inhibiting the network's ability to detect features, but causes valuable spatial information to be lost.

In the example below, the network is able to detect the similar features (eyes, mouth, nose, etc) within both images, but fails to recognize that one image is a human face, while the other is a Picasso-esque due to the CNN's inability to encode spatial relationships after multiple pooling layers.

Conversely, we hope that a CNN can recognize that both of the following pictures contain a kitten. Unfortunately, when we feed the two images into a ResNet50 architecture, only the first image is correctly classified, while the second image is predicted to be a guinea pig.

For a more in depth discussion on the problems with ConvNets, please listen to Geoffrey Hinton's talk "What is wrong with convolutional neural nets?" given at MIT during the Brain & Cognitive Sciences - Fall Colloquium Series (December 4, 2014).

Human vision ignores irrelevant details by using a carefully determined sequence of fixation points to ensure that only a tiny fraction of the optic array is ever processed at the highest resolution. Hinton argues that our brains reason visual information by deconstructing it into a hierarchical representation which we then match to familiar patterns and relationships from memory. The key difference between this understanding and the functionality of CNNs is that recognition of an object should not depend on the angle from which it is viewed.

To enforce rotational and translational equivariance, Capsule Networks store and preserve hierarchical pose relationships between objects. The core idea behind capsule theory is the explicit numerical representations of relative relationships between different objects within an image. Building these relationships into the Capsule Networks model, the network is able to recognize newly seen objects as a rotated view of a previously seen object. For example, the below image shows the Statue of Liberty under five different angles. If a person had only seen the Statue of Liberty from one angle, they would be able to ascertain that all five pictures below contain the same object (just from a different angle).

Building on this idea of hierarchical representation of spatial relationships between key entities within an image, the authors introduce Capsule Networks. Unlike traditional CNNs, Capsule Networks are better equipped to classify correctly under rotational invariance. Furthermore, the authors managed to achieve state of the art results on MNIST using a fraction of the training samples that alternative state of the art networks require.

What is a Capsule

"Each capsule learns to recognize an implicitly defined visual entity over a limited domain of viewing conditions and deformations and it outputs both the probability that the entity is present within its limited domain and a set of “instantiation parameters” that may include the precise pose, lighting and deformation of the visual entity relative to an implicitly defined canonical version of that entity. When the capsule is working properly, the probability of the visual entity being present is locally invariant — it does not change as the entity moves over the manifold of possible appearances within the limited domain covered by the capsule. The instantiation parameters, however, are “equivariant” — as the viewing conditions change and the entity moves over the appearance manifold, the instantiation parameters change by a corresponding amount because they are representing the intrinsic coordinates of the entity on the appearance manifold."

We want the length of the output vector of a capsule to represent the probability that the entity represented by the capsule is present in the current input. The paper performs a non-linear squashing operation to ensure that vector length falls between 0 and 1, with shorter vectors (less likely to exist entities) being shrunk towards 0.

where [math]\mathbf{v}_j[/math] is the vector output of capsule [math]j[/math] and [math]s_j[/math] is its total input.

For all but the first layer of capsules, the total input to a capsule [math]s_j[/math] is a weighted sum over all “prediction vectors” [math]\hat{\mathbf{u}}_{j|i}[/math] from the capsules in the layer below and is produced by multiplying the output [math]\mathbf{u}i[/math] of a capsule in the layer below by a weight matrix [math]\mathbf{W}ij[/math]

The notation can get somewhat confusing, so I will provide intuition behind the computational steps within a capsule. The following image is taken from naturomic's talk on Capsule Networks.

The above image illustrates the key mathematical operations happening within a capsule (and compares them to the structure of a neuron). Although the operations are rather straightforward, it's crucial to note that the capsule computes an affine transformation onto each input vector. The length of the input vectors [math]\mathbf{u}_{i}[/math] represent the probability of entity [math]i[/math] existing in a lower level. This vector is then reoriented with an affine transform using [math]\mathbf{W}_{ij}[/math] matrices that encode spatial relationships between entity [math]\mathbf{u}_{i}[/math] and other lower level features.

A capsule [math]i[/math] in a lower-level layer needs to decide how to send its output vector to higher-level capsules [math]j[/math]. This decision is made with probability proportional to [math]c_{ij}[/math]. If there are [math]K[/math] capsules in the level that capsule [math]i[/math] routes to, then we know the following properties about [math]c_{ij}[/math]: [math]\sum_{j=1}^M c_{ij} = 1, c_{ij} \geq 0[/math] 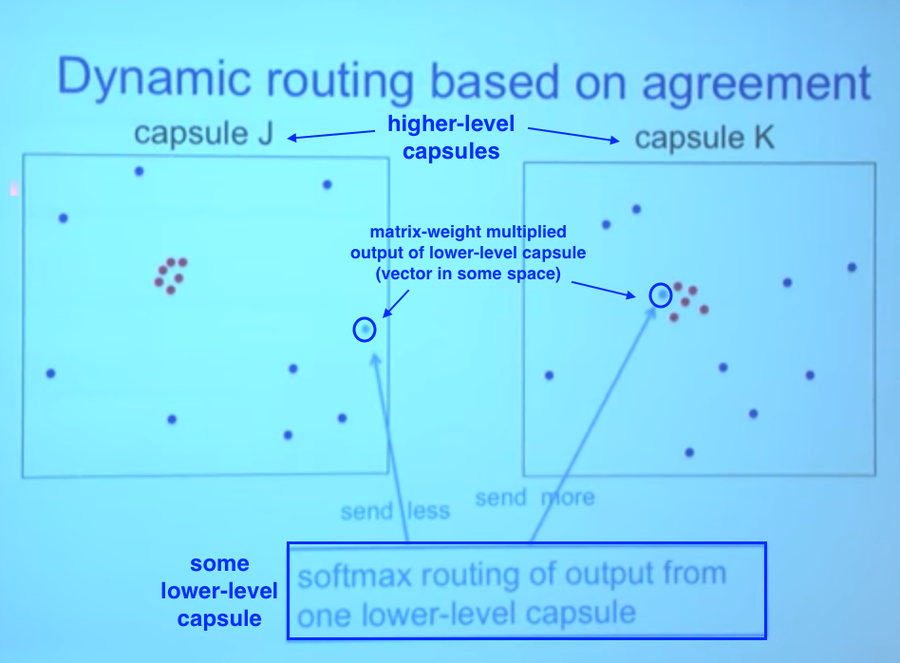 In the image above, we notice that a cluster of points similar to the current vector has already been routed into capsule K, while most points in capsule J are high dissimilar. It thus makes more sense to route the current observation into capsule K; we adjust the corresponding weight upwards during training.

These weights are determined through the dynamic routing procedure:

Although dynamic routing is not the only manner in which we can encode relationships between capsules, the premise of the paper is to demonstrate the capabilities of capsules under a simple implementation. Since the paper's release in 2017, numerous alternative routing implementations have been released including an EM matrix routing algorithm by the same authors (ICLR 208).

The capsule network architecture given by the authors has 11.36 million trainable parameters. The paper itself is not very detailed on exact implementation of each architectural layer, and hence it leaves some degree of ambiguity on coding various aspects of the original network. The capsule network has 6 overall layers, with the first three layers denoting components of the encoder, and the last 3 denoting components of the decoder.

The cost function looks very complicated, but can be broken down into intuitive components. Before diving into the equation, remember that the length of the vector denotes the probability of object existence. The left side of the equation denotes loss when the network classifies an observation correctly; the term becomes zero when classification is incorrect. To compute loss when the network correctly classifies the label, we subtract the vector norm from a fixed quantity [math]m^+ := 0.9[/math]. On the other hand, when the network classifies a label incorrectly, we penalize the loss based on the network's confidence in the incorrect label; we compute the loss by subtracting [math]m^- := 0.1[/math] from the vector norm.

A graphical representation of loss function values under varying vector norms is given below.