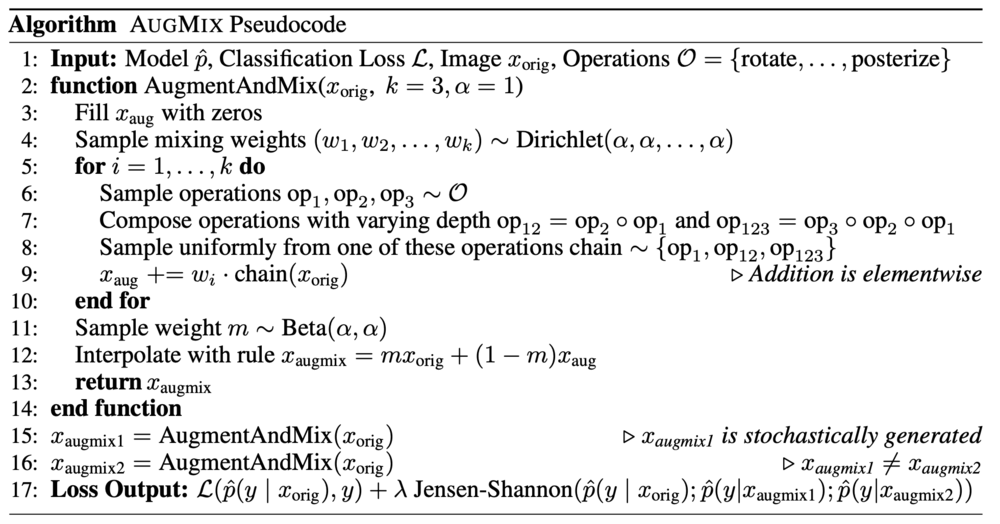 The authors considered a different type of noise to check the robustness of their approach. I would be really curious to test their methodology in Large Models, adding self-attention layers to models improves robustness. To test the abstraction properties, we know that the convolutional networks are biased towards texture, which might harm robustness. Another hypothesis on naturally occurring distribution shifts is the synthetic robustness interventions including diverse data augmentations which might not help with robustness.

Recently, a lot of approaches to Mixed Sample Data Augmentation have been proposed, many of which obtain state-of-the-art performance in several classical classification tasks. The contribution of AugMix is to perform MixUp on highly augmented variations of a provided image. By the addition of a trick called Fast AutoAugment the authors of [1] claim they can beat the state-of-the-art (including beating AugMix) in the Fashion-MNIST dataset. What the authors do is apply a binary mask to low frequency images sampled from the Fourier space corresponding to the dataset. In particular, the mask arises from the following low-pass filter. Given a complex Gaussian random matrix [math]Z[/math], and a decay power [math]\delta[/math], we let: \begin{align} filter(z, \delta) [i,j] = \frac{z[i,j]}{freq(w,h) [i,j]^\delta} \end{align}

If [math]\mathcal{F}^{-1}[/math] is the inverse discrete Fourier transform, we gray scale the image by setting:

Finally, this can be converted to a binary mask with mean [math]\lambda[/math] on an image [math]g[/math] by setting:

Where [math]\chi[/math] is the indicator function.