If a snapshot of an image is given to a human, how will he/she describe a scene? He/she might identify that there is a car parked near the curb, or that the car is parked right besides a street light. This ability to decompose objects in scenes into separate entities is key to understanding what is around us and it helps reason about the behavior of objects in the scene.

Automating this process is a classic computer vision problem and is often termed "object detection." The term object detection has been used interchangeably, however, there are four distinct levels of detection (refer to Figure 1 for a visual cue):

1. Classification + Localization: This is the most basic method that detects whether an object is either present of absent in the image and then identifies the position of the object within the image in the form of a bounding box overlayed on the image.

2. Object Detection: The classic definition of object detection points to the detection and localization of multiple objects of interest in the image. The output of the detection is still a bounding box overlayed on the image at the position corresponding the location of the objects in the image.

4. Instance Segmentation: The goal, here, is to not only to assign pixel-level categorical labels, but also to identify each entity separately as sheep 1, sheep 2, sheep 3, grass, and so on.

Semantic segmentation helps us achieve a deeper understanding of images than image classification or object detection. Over and above this, instance segmentation is crucial in in applications where multiple objects of the same category are to be tracked, especially in autonomous driving, mobile robotics, and medical image processing. This paper deals with a novel method to tackle the instance segmentation problem pertaining specifically to the field of autonomous driving, but shown to generalize well in other fields such as medical image processing.

Most of the recent approaches to on instance segmentation are based on deep neural networks and have demonstrated impressive performance. Given that these approaches require a lot of computational resources and that their performance depends on the amount of accessible training data, there has been an increase in the demand to label/annotate large scale datasets. This is both expensive and time consuming. Thus, the main goal of the paper is to enable semi-automatic annotation of object instances.

Most of the datasets available pass through a stage where annotators manually outline the objects with a closed polygon. Polygons allow annotation of objects with small number of clicks (30 - 40) compared to other methods; this approach works as silhouette of an object is typically connected without holes. Thus, the authors intuition behind the success of this method is the sparse nature of these polygons that allow representation of an object through a cluster of pixels rather than a pixel level description.

As an input to the the model, an annotator or perhaps another neural network provides a ground-truth bounding box containing an object of interest and the model auto-generates a polygon outlining the object instance using a Recurrent Neural Network which they call: Polygon-RNN.

The authors have adopted the VGG16 feature extractor architecture with a few modifications pertaining to preservation of feature fused together in a tensor than can feed into the RNN (refer to Figure 2). Namely,the last max-pool layer present in the VGG16 CNN has been removed. The image fed into the CNN is pre-shrunk to a 224x224x3 tensor(3 being the Red, Green, and Blue channels). The image pass through 2 pooling layers with 128 and 2 convolutional layers. At each of these four steps, the idea is to have a width of 512 and so the output tensor at pool2 is convolved with 4 3x3x128 filters and the output tensor at pool3 is convolved with 2 3x3x256 filters. The skip connections from the four layers allows the CNN to extract low-level edge and corner features as well as boundary/semantic information about the instances. Finally, a 3x3 convolution applied alongwith a ReLU non-linearity results in a 28x28x128 tensor that contains semantic information pertinent to the image frame and is taken as an input by the RNN.

The RNN is employed to capture information about the previous vertices in the time-series. Specifically, a Convolutional LSTM is used as a decoder. The ConvLSTM allows preservation of the spatial information in 2D and reduces the number of parameters compared to a Fully Connected RNN. The polygon is modeled with a kernel size of 3x3 and 16 channels outputting a vertex at each time step.

The authors have treated the vertex prediction task as a classification task in that the location of the vertices is through a one-hot representation of dimension DxD + 1 (D chosen to be 28 by the authors in tests). The one addition dimension is the storage cue for loop closure for the polygon. Given that, the one-hot representation of the two previously predicted vertices and the first vertex are taken in as an input, a clockwise (or for that reason any fixed direction) direction can be forced for creation of the polygon. Coming back to the prediction of the first vertex, this is done through further modification of the CNN by adding two DxD layers with one branch predicting object instance boundaries while the other takes in this output as well as the image features to predict the first vertex.

1. Cross entropy is used for the RNN cost function. 2. Instead of Stochastic Gradient Descent, Adam is used for optimization: batch size = 8, learning rate = 1e^-4 (learning rate decays after 10 epochs by a factor of 10) 3. For the first vertex prediction, the modified CNN, mentioned previously, is trained using a multi-task cost function.

The model is allows for the prediction at a given time step to be corrected and this corrected vertex is then fed into the next time step of the RNN, effectively rejecting the network predicted vertex.

The evaluation of the model performance was conducted based on the Cityscapes and KITTI Datasets. The standard Intersection of Union (IoU) measure (a measure that effectively measures overlap of predictions with the ground truth) is used for comparison.

Compared to other instance segmentation techniques, the Polygon-RNN method performs significantly better in the person, car, and rider categories and above average in other categories. In addition, with the help of the annotator, the speed up factor was 7.3 times with under 5 clicks which the authors claim is the main advantage of this method.

In addition, most of the comparisons with human annotators show that the method is at par with human level annotation. 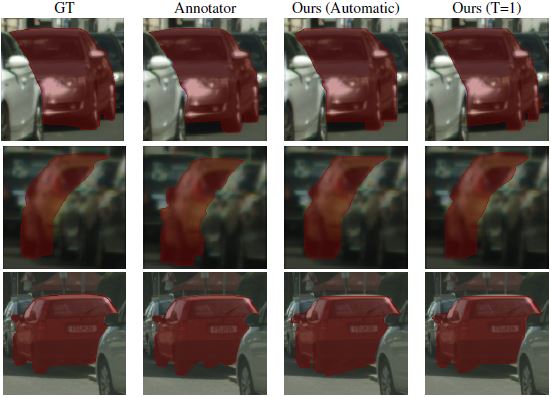 1. Significant improvement in annotation time can be achieved with the Polygon-RNN method itself. 2. However, the flexibility of having inputs from a human annotator helps increase the IoU for a certain range of clicks. 3. The model architecture has a down-sampling factor of 16 and the final output resolution and accuracy is sensitive to object size. 4. Another downside of the model architecture is that training time is increased due to training of the CNN for the first vertex.

1. This paper requires training of an entire CNN for the first vertex and is inefficient in that sense as it introduces additional parameters adding to the computation time and resource demand. 2. The method outperforms other methods only in the three categories mentioned, but isn't a significant improvement in other categories. 3. The baseline methods have an upper hand compared to this model when it comes to larger objects since the nature of the down-scaled structure adopted by this model. 4. With the human annotator in the loop, the model speeds up the process of annotation by over 7 times which is perhaps a big cost and time cutting improvement for companies. 5. In terms of future work, elimination of the additional CNN for the first vertex as well as an enhanced architecture to remain insensitive to the size of the object to be annotated should be implemented.