Generative adversarial networks (GANs) are among the most important generative models, where discriminators and generators compete with each other to solve a minimax game. Based on the original GAN paper, when the training is finished and Nash Equilibrium is reached, the discriminator is nothing but a constant function that assigns a score of 0.5 everywhere. This means that in this setting discriminator is nothing more than a tool to train the generator. Furthermore, the generator in traditional GAN models the data density in an implicit manner, while in some applications we need to have an explicit generative model of data. Recently, it has been shown that training an energy-based model (EBM) with a parameterised variational distribution is also a minimax game similar to the one in GAN. Although they are similar, an advantage of this EBM view is that unlike the original GAN formulation, the discriminator itself is an explicit density model of the data.

Considering some remarks, the authors in this paper show that an energy-based model can be trained using a similar minimax formulation in GANs. After training the energy-based model, they use Fisher Score and Fisher Information (which are calculated based on derivative of the generative models w.r.t its parameters) to evaluate the power of discriminator in modeling the data distribution. More precisely, they calculate normalised Fisher Vectors and Fisher Distance measure using the discriminator's derivative to estimate similarities both between individual data samples and between sets of samples. They name these derived representations Adversarial Fisher Vectors (AFVs). In fact, Fisher vector is a powerful representation that can be calculated using EBMs thanks to the fact that in this EBM model, the discriminator itself is an explicit density model of the data. Fisher vector can be used for setting representation problems which is a challenging task. In fact, as we will see, we can use the Fisher kernel to calculate the distance between two sets of images which is not a trivial task. The authors find several applications and attractive characteristics for AFV as pre-trained features such as:

GANs are a clever way of training a generative model by framing the problem as a supervised learning problem with two sub-models: the generator model that we train to generate new examples, and the discriminator model that tries to classify examples as either real (from the domain) or fake (generated). The weights of generator and discriminator are updated by solving the following optimisation problem: \begin{equation} \underset{G}{\text{max}} \ \underset{D}{\text{min}} \ E_{\mathbf{x} \sim p_{data(\mathbf{x})}}[-\log D(\mathbf{x})]- E_{\mathbf{z} \sim p_{\mathbf{z}}(\mathbf{z})}[-\log (1-D(G(\mathbf{z})))] \tag{1} \label{1} \end{equation}

On the Fisher metric

Note, however, that this is not a metric. An alternative to extending the Fisher distance to compact subsets of [math]\mathbb{R}^d[/math] is to use the Hausdorff metric from elementary real analysis. A discussion of the Hausdorff metric can be found on page 5 of Ken Davidson's Real Analysis notes: http://www.math.uwaterloo.ca/~krdavids/PM351/PMath351Notes.pdf. For completeness, given two compact subsets [math]K, L \subset \mathbb{R}^d[/math] the Hausdorff metric induced by the Fisher distance is given by: \begin{align} d_H(K,L) = \max \left\lbrace \sup_{a \in K} d(a, L), \sup_{b \in L} d(b,K) \right\rbrace \end{align}

It is readily seen that this is a complete metric on the metric space of compact subsets of [math]\mathbb{R}^d[/math]. The analysis performed in the paper might be able to be extended to the choice of this metric.

In light of these issues, they provide a different treatment of G, borrowing inspirations from the Markov chain Monte Carlo (MCMC) literature. MCMC variants have been widely studied in the context of EBM's, which can be used to sample from an unnormalised density and approximate the partition function. Stochastic gradient MCMC is of particular interest as it uses the gradient of the log probability w.r.t. the input, and performs gradient ascent to incrementally update the samples(while adding noise to the gradients). See for a recent application of this technique to deepEBMs. We speculate that it is possible to train G to mimic the stochastic gradient MCMC update rule, such that the samples produced by G will approximate the true model distribution.

There are many variants of GAN method that use a discriminator as a critic to differentiate given distributions. Examples of such variants are Wasserstein GAN, f-GAN and MMD-GAN. There is a resemblance between the training procedure of GAN and deep EBM (with variational inference) but the work present in the paper is different as its discriminator directly learns the target distribution. The implementation of EBM presented in the paper directly learns the parametrised sampler. In some works, regularisation (by noise addition, penalising gradients, spectral normalisation) has been introduced to make GAN more stable. But these additions do not have any formal justification. This paper connects the MCMC based G update rule with the gradient penalty line of work. The following equation show how this method does not always sample from the generator but a small proportion (with probability p) of the samples come from real examples.

As it was pointed out, the main advantage of the EBM GANs is their powerful discriminator, which can learn a density function that characterises the data manifold of the training data. To evaluate how good the discriminator learns the data distribution, authors proposed to use Fisher Information theory. To do this, authors trained some models under different models and employed the discriminator to extract AFVs and then use these vectors for unsupervised pretraining classification task. Results in Table 1 suggest that AFVs achieve state-of-art performance in unsupervised pretraining classification tasks and comparable with the supervised learning.

An interesting point about AFVs is their robustness to overfitting. AFVs are 3 orders of magnitude higher than those of the existing methods, which would typically bring a higher propensity to overfitting. However, AFVs still show great generalisation ability, demonstrating that they are indeed encoding a meaningful low dimensional subspace of original data. Figure 6 shows the nearest neighbours. 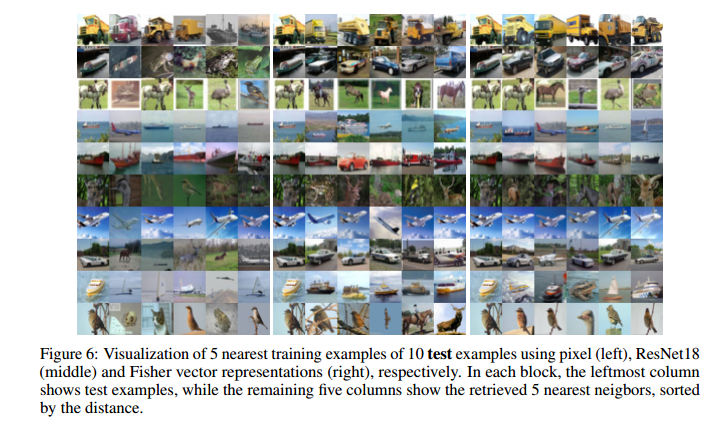 In this paper, the authors demonstrated that GANs can be reinterpreted in order to learn representations across a diverse set of tasks without requiring domain knowledge or annotated data. Authors also showed that in an EBM GAN, discriminator can explicitly learn data distribution and capture the intrinsic manifold of data with low error rate. This is especially different from regular GANs where the discriminator is reduced to a constant function once the Nash Equilibrium is reached. To evaluate how well the discriminator estimates data distribution, the authors took advantage of Fisher Information theory. First, they showed that AFVs are a reliable indicator of whether GAN training is well behaved, and that we can use this monitoring to select good model checkpoints. Second, they illustrated that AFVs are a useful feature representation for linear and nearest neighbour classification, achieving state-of-the-art among unsupervised feature representations and competitive with supervised results on CIFAR-10. Finally, they showed that a well-trained GAN discriminator does contain useful information for fine-grained perceptual similarity suggesting that AFVs are good candidates for image search. All in all, the conducted experiments show the effectiveness of the EBM GANs coupled with the Fisher Information framework for extracting useful representational features from GANs. As future work, authors propose to improve the scalability of the AFV method by compressing the Fisher Vector representation, using methods like product quantisation.