Moreover, some plagiarism detection systems also depend on neural networks to generate a fingerprint of the input document. Though using deep feature representations as a fingerprint is efficient in detecting plagiarism, it still might be weak to adversarial attacks.

Audio fingerprinting may perform better than the algorithms above since most of time, the hash is generated by extracting hand-crafted features rather than training a neural network. But it still is easy to attack.

The audio fingerprinting model plays an important role in copyright detection. It is useful for quickly locating or finding similar samples inside an audio database. Shazam is a popular music recognization application, which uses one of the most well-known fingerprinting models. With three principles: temporally localized, translation invariant, and robustness, the Shazam algorithm is treated as a good fingerprinting algorithm. It shows strong robustness even in presence of noise by using local maximum in spectrogram to form hashes.

The output of this layer is described as φ(x) (x being the input signal), a feature representation of the audio signal sample. However, this representation is flawed due to its vulnerability to noise and perturbation, as well as its difficulty to store and inspect. Therefore, a maximum pooling layer is being implemented to φ(x), in which the network computes a local maximum using a max-pooling function to become robust to changes in the position of the feature. This network layer outputs a binary fingerprint ψ (x) (x being the input signal) that will be used later to search for a signal against a database of previously processed signals. 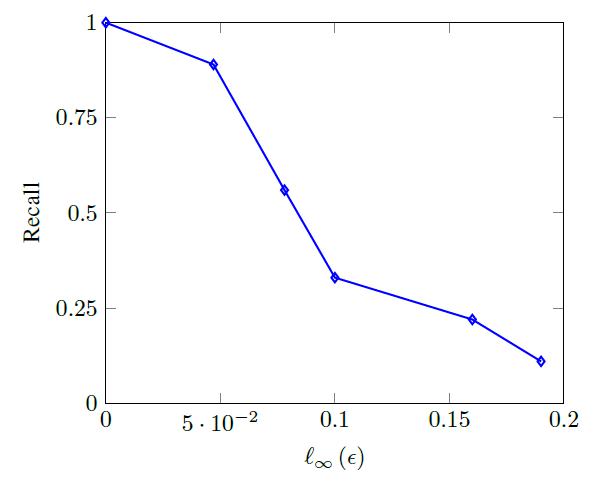 In conclusion, many industrial copyright detection systems used in the popular video and music website such as YouTube and AudioTag are significantly vulnerable to adversarial attacks established in the existing literature. By building a simple music identification system resembling that of Shazam using neural network and attack it by the well-known gradient method, this paper firmly proved the lack of robustness of the current online detector. The intention of this paper is to raise the awareness of the vulnerability of the current online system to adversarial attacks and to emphasize the significance of enhancing our copyright detection system. More approaches, such as adversarial training need to be developed and examined in order to protect us against the threat of adversarial copyright attack.

- The experiments in this paper appear like to be a proof-of-concept rather than a serious evaluation of a model. One problem is that the norm is used to evaluate the perturbation. Unlike the norm in image domains which can be visualized and easily understood, the perturbations in the audio domain are a more difficult to comprehend. A cognitive study or something like a user study might need be conducted in order to understand this. Another question related to this is that if the random noise is 2x bigger or 3x bigger in terms of norm, does this make huge difference when listening to it? Are these two perturbations both very obvious or both unnoticeable? In addition, it seems that a dataset is built but the stats are missing. Third, no baseline methods are being compared to in this paper, not even an ablation study. The proposed two methods (default and remix) seem to perform similarly.

- There could be an improvement in term of how to find the threshold in general, it mentioned how to measure the similarity of two pieces of content but have not discuss what threshold should we set for this model. In fact, it is always a challenge to determine the boundary of "Copyright Issue" or "Not Copyright Issue" and this is some important information that may be discussed in the paper.

- The fingerprinting technique used in this paper seems rather elementary, which is a downfall in this context because the focus of this paper is adversarial attacks on these methods. A recent 2019 work (https://arxiv.org/pdf/1907.12956.pdf) proposed a deep fingerprinting algorithm along with some novel framing of the problem. There are several other older works in this area that also give useful insights that would have improved the algorithm in this paper.