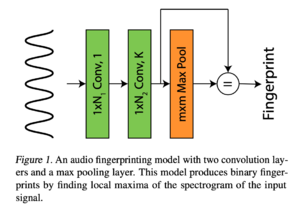 where $||\delta||_p\le\epsilon$ is the $l_p$-norm of the perturbation and $\epsilon$ is the bound of the difference between the original file and the adversarial example.

This is effective for white-box attacks with knowing the fingerprinting system. However, the loss can be easily minimized by modifying the location of the peaks by one pixel, which would not be reliable to transfer to black-box industrial systems. To make it more transferable, a new loss function which involves more movements of the local maxima of the spectrogram is proposed. The idea is to move the locations of peaks in $\phi(x)$ outside of neighborhood of the peaks of $\phi(y)$. In order to implement the model more efficiently, two max-pooling layers are used. One of the layers has a bigger width $w_1$ while the other one has a smaller width $w_2$. For any location, if the output of $w_1$ pooling is strictly greater than the output of $w_2$ pooling, then it can be concluded that no peak in that location with radius $w_2$.