This work builds on Zhang et al.(2016), who showed deep neural networks can easily memorize randomly labeled training data, despite generalizing well on real labels of the same inputs. The authors consider two questions: how can we predict if a minimum will generalize to the test set, and why does stochastic gradient descent find minima that generalize well? They show that the same phenomenon occurs in small linear models. These observations are explained by the Bayesian evidence, which penalizes sharp minima but is invariant to model parameterization. We also demonstrate that, when one holds the learning rate fixed, there is an optimum batch size which maximizes the test set accuracy. The authors propose that the noise introduced by small mini-batches drives the parameters towards minima whose evidence is large. Interpreting stochastic gradient descent as a stochastic differential equation, we identify the “noise scale” [math] g \approx \epsilon N/B [/math] where [math]ε[/math] is the learning rate, [math]N[/math] the training set size and [math]B[/math] the batch size. Consequently the optimum batch size is proportional to both the learning rate and the size of the training set, [math]B_{opt} \propto \epsilon N[/math] . They verify these predictions empirically.

This paper shows Bayesian principles can explain many recent observations in the deep learning literature, while also discovering practical new insights. Zhang et al. (2016) trained deep convolutional networks on ImageNet and CIFAR10, achieving excellent accuracy on both training and test sets. They then took the same input images, but randomized the labels, and found that while their networks were now unable to generalize to the test set, they still memorized the training labels. They claimed these results contradict learning theory, although this claim is disputed (Kawaguchi et al., 2017; Dziugaite & Roy, 2017). Nonetheless, their results beg the question; if our models can assign arbitrary labels to the training set, why do they work so well in practice? Meanwhile, Keskar et al. (2016) observed that if we hold the learning rate fixed and increase the batch size, the test accuracy usually falls. This striking result shows improving our estimate of the full-batch gradient can harm performance. Goyal et al. (2017) observed a linear scaling rule between batch size and learning rate in a deep ResNet, while Hoffer et al. (2017) proposed a square root rule on theoretical grounds. Many authors have suggested “broad minima” whose curvature is small may generalize better than “sharp minima” whose curvature is large (Chaudhari et al., 2016; Hochreiter & Schmidhuber, 1997). Indeed, Dziugaite & Roy (2017) argued the results of Zhang et al. (2016) can be understood using “nonvacuous” PAC-Bayes generalization bounds which penalize sharp minima, while Keskar et al. (2016) showed stochastic gradient descent (SGD) finds wider minima as the batch size is reduced. However, Dinh et al. (2017) challenged this interpretation, by arguing that the curvature of a minimum can be arbitrarily increased by changing the model parameterization.

The main contributions of this paper are to show that:

Zhang et al. (2016) showed high training competency of neural networks under informative labels, but drastic overfitting on improper labels. This implies weak generalizability even when a small proportion of labels are improper. The authors show that generalization is strongly correlated with the Bayesian evidence, a weighted combination of the depth of a minimum (the cost function) and its breadth (the Occam factor). Bayesians tend to make distributional assumptions on gradient updates by adding isotropic Gaussian noise. This paper builds upon these Bayesian principles by driving SGD away from sharp minima, and towards broad minima (the more broad, the better generalization due to less influence from small perturbations within input). The stochastic differential equation used as a component of gradient updates effectively serves as injected noise that improves a network's generalizability.

The weakly regularized model memorizes random labels, however, generalizes properly on informative labels. Besides, the predictions are overconfident. The authors also showed that the test accuracy peaks at an optimal batch size, if one holds the other SGD hyper-parameters constant. It is postulated that the optimum represents a tradeoff between depth and breadth in the Bayesian evidence. However it is the underlying scale of random fluctuations in the SGD dynamics which controls the tradeoff, not the batch size itself. Furthermore, this test accuracy peak shifts as the training set size rises. The authors observed that the best found batch size is proportional to the learning rate. This scaling rule allowed the authors to increase the learning rate by simultaneously increasing the batch size with no loss in test accuracy and no increase in computational cost, thus parallelism across multiple GPU's can be fully leveraged to easily decrease training time. The scaling rule could also be applied to production models by consequentially increasing the batch size as new training data is introduced.

The value [math]\omega_0 [/math] which minimizes the cost function lies at the maximum of this posterior. To predict an unknown label [math]y_t [/math] of a new input [math]x_t [/math], we should compute the integral,

Notice that the evidence is computed by integrating out the parameters; and consequently it is invariant to the model parameterization. Since this integral is dominated by the region near the minimum [math]\omega_0 [/math], we can estimate the evidence by Taylor expanding [math]C(\omega; M) \approx C(\omega_0) + C′′(\omega_0)(\omega - \omega_0)^2/2[/math]. This gives us

Occam’s factor arises from the log ratio [math]\ln (\lambda_i/\lambda) [/math] The Occam factor describes the fraction of the prior parameter space consistent with the data. Occam’s factor penalizes the amount of information the model must learn about the parameters to accurately model the training data. Since the fraction is always less than one, the authors propose to approximate [math]P(y\mid x;M) [/math] away from local minima by only performing the summation over eigenvalues [math]\lambda_i \geq \lambda [/math].

The evidence supports the intuition that broad minima generalize better than sharp minima, but unlike the curvature it does not depend on the model parameterization. Dinh et al. (2017) showed one can increase the Hessian eigenvalues by rescaling the parameters, but they must simultaneously rescale the regularization coefficients, otherwise the model changes. Since Occam’s factor arises from the log ratio, [math]\ln (\lambda_i/\lambda) [/math] , these two effects cancel out. Note however that while the evidence itself is invariant to model parameterization, one can find reparameterizations which change the approximate evidence after the Laplace approximation. . It is difficult to evaluate the evidence for deep networks, as we cannot compute the Hessian of millions of parameters. Additionally, neural networks exhibit many equivalent minima, since we can permute the hidden units without changing the model. To compute the evidence we must carefully account for this “degeneracy”. The authors argue these issues are not a major limitation, since the intuition they build studying the evidence in simple cases will be sufficient to explain the results of both Zhang et al. (2016) and Keskar et al. (2016).

Zhang et al. (2016) showed that deep neural networks generalize well on training inputs with informative labels, but the same model can overfit on the same input images when the labels are randomized; perfectly memorizing the training set. To demonstrate that these observations are not unique to deep network, the authors use logistic regression. They form a small balanced training set comprising 800 images from MNIST, of which half have true label “0” and half true label “1”. The test set is balanced, comprising 5000 MNIST images of zeros and 5000 MNIST images of ones. There are two tasks. In the first task, the labels of both the training and test sets are randomized. In the second task, the labels are informative, matching the true MNIST labels. The model has 784 weights and 1 bias.

The accuracy of the model predictions on both the training and test sets is shown in figure 1. When trained on the informative labels, the model generalizes well to the test set, so long as it is weakly regularized. However the model also perfectly memorizes the random labels, replicating the obser- vations of Zhang et al. (2016) in deep networks. No significant improvement in model performance is observed as the regularization coefficient increases. For completeness, we also evaluate the mean margin between training examples and the decision boundary. For both random and informative labels, the margin drops significantly as we reduce the regularization coefficient. When weakly regularized, the mean margin is roughly 50% larger for informative labels than for random labels.

The results showed above indicate that the test accuracy peaks at an optimal batch size, if one holds the other SGD hyper-parameters constant. It is argued that this peak arises from the tradeoff between depth and breadth in the Bayesian evidence. However it is not the batch size itself which controls this tradeoff, but the underlying scale of random fluctuations in the SGD dynamics. The following content identifies this SGD “noise scale”, and uses it to derive three scaling rules which predict how the optimal batch size depends on the learning rate, training set size and momentum coefficient. First, interpret gradient update, as the discrete update of a stochastic differential equation \begin{equation*}\frac{d\omega}{dt} = \frac{dC}{d\omega} + \eta(t)\end{equation*} [math]\eta[/math] represents noise [math]\langle \eta(t) \rangle = 0[/math] and [math] \langle \eta (t)\eta (t')\rangle = gF (\omega)\delta (t-t')[/math]. [math]t[/math] is a continous variable, and [math]F(\omega)[/math] matrix describing the gradient covariances. The SGD noise scale is taken to be [math]g \approx \epsilon N/B[/math] where [math]\epsilon[/math] is the learning rate, [math]N[/math] training set size and [math]B[/math] the batch size. 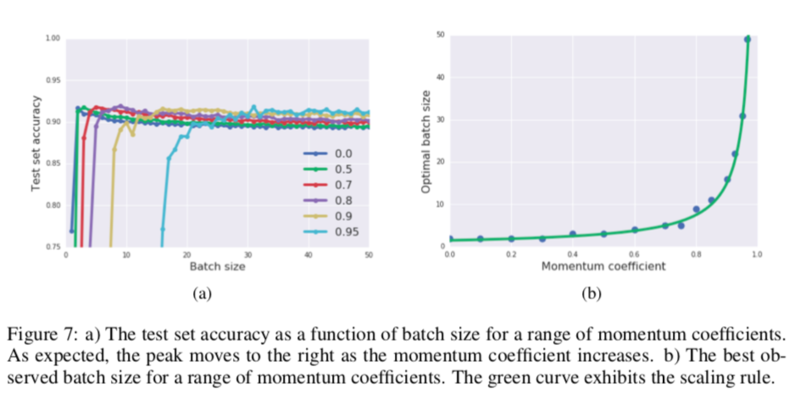 The paper presents how mini-batch noises with SGD can improve. However, the usefulness of the approach can be described and analyzed in greater details, if the author coudl provide the performance for various well-known real-life datas. Note that even without those evidences, the paper's approach and methods are still very interesting.

The paper showed that Mini-batch noise helps SGD to go away from sharp minima, and provided an evidence that there is an optimal optimum batch size for a maximum the test accuracy. Based on interpreting SGD as integrating stochastic differential equation, this batch size is proportional to the learning rate and the training set size. Moreover, the authors shown that Bopt ∝ 1/(1 − m), where m is the momentum coefficient. More analysis was done on the relation between the learning rate, effective learning rate, and batch size is presented in ICLR 2018, where the authors proved by experiments that all the benefits of decaying the learning rate are achieved by increasing the batch size in addition to reducing the number of parameter updates dramatically, and also were able use literature parameters without the need of any hyper parameter tuning (Samuel L. Smith, Pieter-Jan Kindermans, Chris Ying, Quoc V. Le).